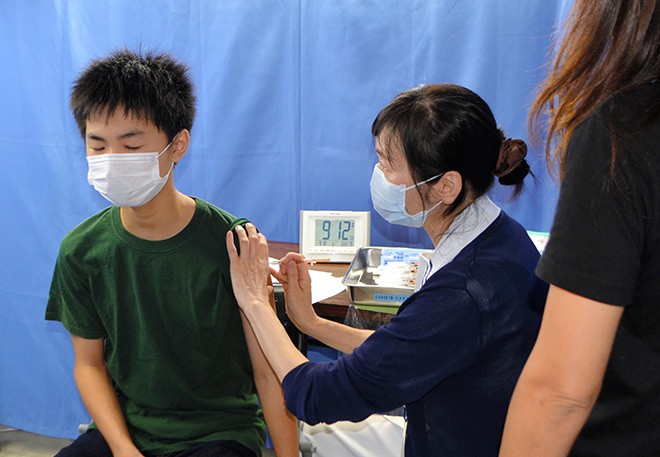 Now that a U.S. panel of experts has given its approval for vaccinating children between the ages of 5 and 11 against COVID-19, discussions will likely intensify in Japan over a similar measure here.

Officials with Pfizer’s Japanese arm have begun talks with health ministry officials about submitting an application asking that the age for those getting the vaccine be lowered.

The health ministry is expected to begin a new assessment because of differences when administering the vaccines to children in comparison to what has been done when jabs have been given to millions of Japanese adults.

Once approval is given, a government panel of experts will decide whether the vaccine for children should also be paid for by the government.

After the United States approved emergency use of the vaccine for children 12 and older, Japan quickly followed, lowering the age for receiving the vaccines from 16 to 12 in May.

Japan is expected to again follow suit after the most recent lowering of the age limit for vaccines by the United States.

One issue still undecided is when the vaccinations for children between 5 and 11 will begin because Pfizer has not indicated when it would be able to start delivering such vaccines.

During the fifth wave of COVID-19 cases when the stronger Delta variant became more prevalent, infections spread among children. The initial novel coronavirus did not affect children to the same extent as adults.

In August, about 20 percent of new COVID-19 cases were of individuals under 20. There were many cases of cluster infections at schools.

But even with the spread of COVID-19 among younger individuals, no child under 10 has died from the illness to date in Japan. Many of the younger people confirmed with COVID-19 only have minor symptoms or are asymptomatic.

However, according to Mamoru Ayusawa, an associate professor of pediatrics at Nihon University who is also vice chairman of the Japanese Society of Kawasaki Disease, there were at least 10 cases in Japan of children developing multisystem inflammatory syndrome (MIS-C), in which a patient’s heart or liver functions deteriorate, after being infected with COVID-19.

MIS-C symptoms can worsen over the course of a few weeks.

A number of children have also complained of headaches and lethargy as aftereffects of COVID-19.

Giving children the vaccine could prevent symptoms from worsening. Some may want the vaccine as they prepare for private elementary or junior high school entrance exams or to participate in sporting events.

Akihiko Saito, professor of pediatrics at Niigata University who is knowledgeable about vaccination programs in both Japan and the United States, said children should also be included in the overall trend toward reducing infections through a spread of vaccinations.

He added that there were no other options that could aggressively reduce the number of infections or prevent the worsening of symptoms.

(This article was written by Kai Ichino, Kayoko Geji and Hiromi Kumai.)