Gas prices at the pumps soaring along with home heating costs 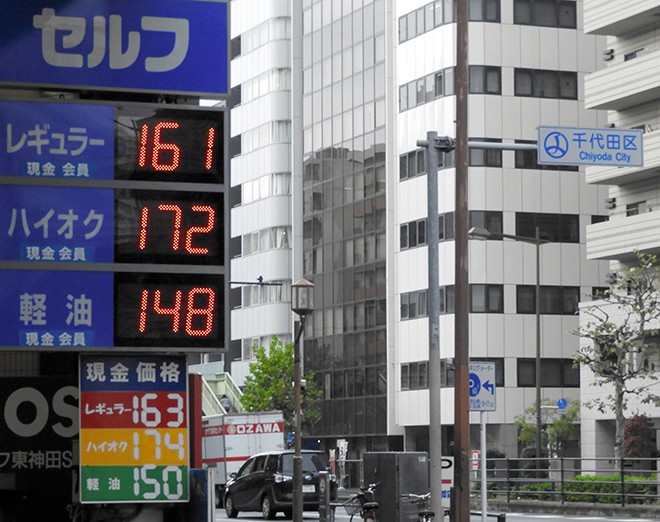 The price of gas is soaring in Japan. This photo was taken in Tokyo on Oct. 27. (Toshio Tada)

As fuel prices skyrocket higher and higher, consumers and industries across Japan are reeling from the white-knuckle ride.

The average retail price of regular gasoline in Japan soared to 167.3 yen ($1.47) per liter as of Oct. 25, according to an announcement by the Oil Information Center at the Institute of Energy Economics Japan on Oct. 27. That is 2.7 yen higher than the previous week.

The price of gasoline has risen for eight weeks straight, and this marks the first time in about seven years that the price has risen this high and remained there.

And it is expected to rise even further next week, lightening the pocketbooks of many consumers--especially in areas where people frequently use their cars for commuting to work and other daily tasks.

The price of crude oil also continues to shoot up. U.S. WTI crude futures, a benchmark indicator, topped $85 per barrel at one point for the first time in about seven years on Oct. 25.

Demand for crude oil is raging due to the resumption of normal economic activities. But the main oil producers, various Middle Eastern countries and Russia, are slowly ramping up production.

When OPEC Plus, a group consisting of oil producing powerhouses, holds a meeting in early November, the spotlight will be on whether it decides to step up oil production.

“The situation would change depending on how OPEC Plus proceeds, but if the current situation continues, the price could increase further,” said Tsutomu Sugimori, chairman of the Petroleum Association of Japan, at an Oct. 27 news conference.

Transportation is costly on Nagasaki Prefecture’s remote islands, where the price of gas is set relatively higher than the rest of the country.

At a gas station in Goto city on Fukuejima island, part of the Goto islands, the price was 185 yen per liter.

The manager said the wholesale price at the pumps has increased more than 10 yen compared to the summer. But he said he cannot pass all the price hikes onto his customers.

“Gasoline is a necessity for living, so I try to increase the retail price as little as possible. I manage to keep my business running while taking a hit on profits,” he said.

But gas is not the only burning concern on consumers’ minds.

The cost of kerosene, used for heating, is also rising.

According to the Oil Information Center, the price was 1,910 yen per 18-liter tank of kerosene, 50 yen higher than the previous week. It marks the first time in about seven years that the price rose that high.

In Sapporo, a council consisting of citizen groups and labor unions submitted a request to the city government on Oct. 15 calling for financial aid to help cover the cost of kerosene for low-income residents.

Many people cannot afford to use their stoves for more than a few hours a day during the winter, and spend their time indoors wearing their coats and outer wear.

“The kerosene price hike poses a risk to the lives of low-income and vulnerable residents,” said Yuta Murai, the council’s secretary-general.

According to the Hokkaido Consumers Association, the volume of kerosene being consumed by Hokkaido households with at least two people is more than five times the national average. Kerosene expenses this coming winter are expected to rise about 15,000 yen higher than last year on average.

The price spike is hammering the fisheries industry, along with other industries that consume a lot of fuel.

In Watari, Miyagi Prefecture, a fisherman from Arahama Port said he is feeling the pinch.

“I have poor catches, so if the price of fuel rises, I have more debt,” he said. “Even if the weather is fine, I sometimes cannot sail my fishing boat.”

He also said the entire fishing business is in a tough bind because the cost of transporting fish to market is rising and the price for fish has dropped amid the COVID-19 pandemic.

(This article was written by Keiichi Kitagawa, Aki Sato and Sakiko Kondo.)