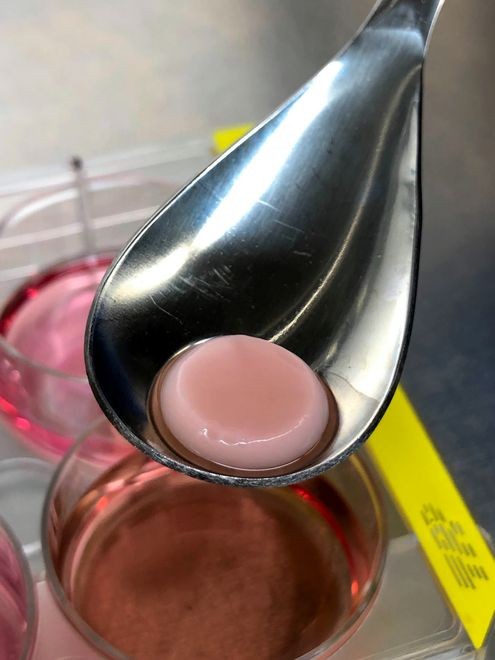 A research team has simultaneously engineered both muscle tissue and fat from sampled cattle cells, an achievement that could eventually bring higher quality cultured meat to dinner tables.

The scientists mainly from Juntendo University said the cultivated muscle-fat combination can be used as an ingredient for meat produced in vitro for consumption. It will allow the arrangement of the lean and tallow parts to adjust freely.

Artificially produced meat can be made by greatly proliferating a few cells collected from living creatures.

The method is drawing attention as a countermeasure against food shortages deriving from population growth as well as greenhouse gas emissions from cattle burps and flatulence.

While processed products using cultured meat are available in some areas overseas, the technique is still in a research stage in Japan, and no foodstuffs produced in that style are available in the market.

For most of those meat products, muscle cells are cultivated to produce muscular fibers for the meat. Fat and other elements are injected afterward to make the end result resemble the real thing.

The research team developed a technology to culture a certain kind of cell extracted from the animal’s skeletal muscle to engineer chunks of muscular tissue and fat. That type of cell is easy to proliferate and congregate.

Currently, chunks up to 0.5 millimeter in diameter can be produced. The researchers put the cultivated pieces in collagen gel, and said the fragments grew to 1.5 centimeters in diameter.

Chihiro Akazawa, a medical professor at Juntendo University, estimated that at least 70 trillion cells can be produced if a specific cell sampled from 100 grams of beef is cultured for 21 days under the method.

“Engineering cultured meat from a single cell may lead to lowered costs and time,” Akazawa said. “If the culturing technique is further improved to arrange muscle and fat in a balanced manner or add healthy oil, products made with it could be marketed as nutritional supplements as well.”

The team’s findings have been published in the online edition of the Swiss scientific journal Cells at (https://doi.org/10.3390/cells10092499).