Most lawmakers loath to respond to survey on nuke ban treaty 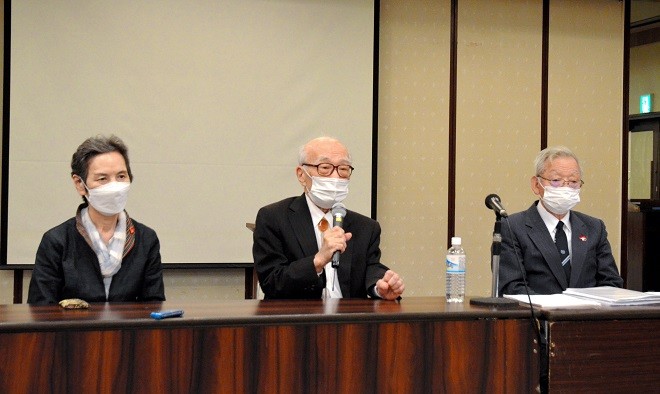 Members of the Japan Confederation of A- and H-Bomb Sufferers Organizations (Nihon Hidankyo) announce the results of a survey of lawmakers on the Treaty on the Prohibition of Nuclear Weapons at an Oct. 14 news conference. (Roppei Tsuda)

Nearly 77 percent of Diet members are in favor of Japan ratifying the Treaty on the Prohibition of Nuclear Weapons, according to a survey that received responses from only 32 percent of lawmakers.

The Japan Confederation of A- and H-Bomb Sufferers Organizations (Nihon Hidankyo) conducted the survey on 703 ruling and opposition lawmakers in August and September, and had received responses from 226, or 32 percent, of the 703 members contacted as of Oct. 12.

The results were released on Oct. 14, the day the Lower House was dissolved for the Oct. 31 election.

Of the respondents, 174 lawmakers were in favor of discussing and ratifying the prohibition treaty in the Diet.

The treaty prohibits the development, testing, production, possession and the threat or use of nuclear weapons. It took effect in January.

But Japan has not ratified the treaty on grounds that its security relies on the nuclear umbrella of the United States.

Although none of the 226 respondents said they oppose Japan’s ratification of the accord, many from the ruling Liberal Democratic Party did not express clear support for the move.

Forty-five of the respondents were LDP members. Thirteen of them said they were in favor of ratifying the treaty.

Prime Minister Fumio Kishida, the LDP president who represents an electoral district in Hiroshima Prefecture, did not respond to the survey.

Of the 91 lawmakers from the main opposition Constitutional Democratic Party of Japan who responded, 87 said they support ratification of the accord.

Two out of 14 responding Diet members from Nippon Ishin (Japan Innovation Party) supported ratifying the treaty, while the figure was 15 among 16 independent lawmakers.

The others in favor of ratification were eight from the Democratic Party for the People as well as two each from the Reiwa Shinsengumi political party, the Social Democratic Party and the parliamentary group “Okinawa no Kaze.”

“I don’t think Diet members are serious enough about addressing the issue of abolishing nuclear weapons since only 10 percent of LDP lawmakers and less than 60 percent of CDP members responded to the survey,” said Sueichi Kido, secretary-general of Nihon Hidankyo.

The group conducted a similar survey at the end of last year, just before the treaty came into force, and received responses from 109 lawmakers.

Nihon Hidankyo released the names of Diet members who responded to the latest survey and their answers on its official website on Oct. 18 to help voters decide which candidate to choose in the Oct. 31 Lower House election.