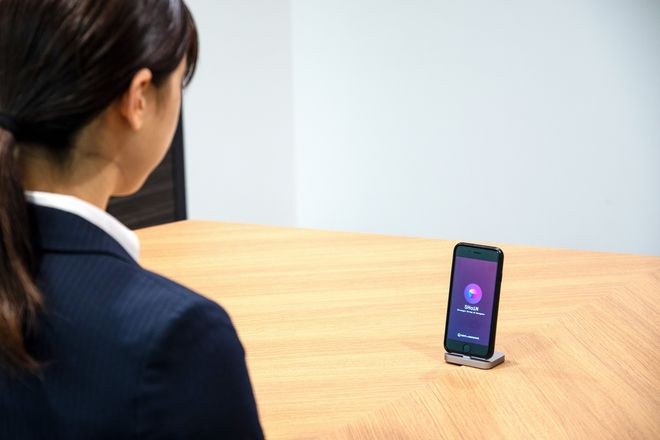 A scene from an AI-powered interview using a smartphone (Provided by Talent and Assessment Inc.)

An increasing number of companies are turning to artificial intelligence to conduct interviews with job applicants and employees up for promotion.

While the role of AI interviewers is mostly limited to asking interviewees questions and transcribing their answers, AI offerings now on the market can also score candidates at a similar level to human recruiters.

But experts are raising concerns that AI can have unknown biases and they insist that human involvement is necessary when it comes to making final decisions on staffing.

According to Talent and Assessment Inc. (T&A), a pioneer in providing AI-based interview services based in Tokyo's Minato Ward, at least 300 companies and organizations use its services.

Matsuya Foods Holdings Co., which operates the "gyudon" (beef-and-rice bowl) restaurant chain Matsuya and other eateries, began using T&A's AI service for interviews in December last year as it looked at which permanent employees it should promote to store managers.

The company normally conducts the review process twice a year at venues in Tokyo and Osaka. But the examination’s long hours place the candidates under intense strain.

Using the AI interview system, candidates can use a special app to answer questions at any time or location of their choice by simply talking to it.

For example, the AI would ask a candidate whether they have had a problem and come up against a wall at work.

If the candidate says "yes," the AI would set off into a string of related questions to probe into specifics, such as how they coped with the problem and why they responded the way they did.

The AI transcribes the questions and answers from the session. Specialized staff at T&A then evaluate the candidate based on 10 qualification categories including vitality, flexibility and sensibility on a scale of 0 to 10 and compile a report.

Matsuya Foods then selects the necessary qualifications for staff members to serve as store managers and selects candidates suitable for the job in order of their scores.

"We had concerns at first, but when we looked at the outcome, it was similar to our own evaluations," said Koi Ichikawa, chief manager of the personnel affairs management group at the company.

Yuka Yanagisawa was one of the lucky ones promoted to store manager in August after doing an interview using the app.

"It was difficult because I was asked question after question without having time to think. But I didn't feel uncomfortable," Yanagisawa said.

Yoshinoya Holdings Co., which operates another major beef-bowl restaurant chain, has also introduced the AI software in recruiting part-time workers. It started with some 400 outlets in the Kanto region in spring 2019.

The company uses a simplified version of the program to conduct 5- to 10-minute interviews. Staff members at the company's main office who previously served as store managers grade them on a pass or fail basis.

So far, the company has interviewed about 1,000 applicants using the AI approach.

"We can reduce the burden on store managers who have to schedule dates and times for interviews and then score them," said Shohei Yoda, who oversees recruitment.

According to T&A, major companies mainly use its AI interview system for their first round of interviews in recruiting new college graduates.

"It can make fair and equitable judgments free from academic background and appearance because evaluations are done based on their comments," said company President Toshiaki Yamasaki.

Although assessments are conducted by human recruiters after the interviews, the AI can also grade job seekers, according to the company.

More than 20,000 people have been interviewed by the AI system developed by T&A.

After the firm fed the AI with the evaluations carried out by specialized staff, it learned how to conduct assessments on par with human experts.

"First, we want to start a trial operation," Yamasaki said. "Once AI becomes more socially acceptable and protocols for its use are established, we will consider providing a full-fledged service."

The president added that T&A will make efforts to present evidence of how its AI makes evaluations to address the "black box" problem--when humans are left without a way of knowing how AI systems reach their conclusions.

According to a survey of about 2,000 companies in Japan, conducted by job information website operator Mynavi Corp., only 0.8 percent said they intend to use AI for hiring new college graduates in 2022.

The figure was 1.6 percent for listed companies.

"When interviewing new college graduates, their moods and attitudes that cannot be put into words are also given importance. It is difficult to depend on AI for this aspect, so it may be ill-fitted for recruiting new graduates," said Mynavi senior researcher Kozue Togo.

"In contrast with recruiting new graduates, it is significant to use AI to help with promotion exams and for position matching," she added.

Not everyone is thrilled with how companies are embedding AI into their human resources practices.

Susumu Hirano, a professor at Chuo University's Faculty of Global Informatics and a member of an expert panel advising the government on AI, raised concerns about how the new technology can negatively affect people’s lives.

"Recruitment can greatly affect their assets and rights. Careful consideration is required over how to use AI."

Hirano said AI brings various issues, such as adding opacity to the hiring process. It can leave human users clueless about the basis of its judgment. And it can also lead to the issue of “uncontrollability,” when AI makes decisions that differ from what the developer intended.

"It is possible that (AI) can make discriminatory decisions as a result of learning data based on old values," Hirano continued. "It is imperative to prevent prejudice from developing based on data for AI to learn, in addition to taking conclusions made by AI with a grain of salt and having human users confirm the results."

Policy makers are meanwhile working on coming up with appropriate guidelines for AI.

In Japan, a government council published a document titled "Social Principles of Human-Centric AI" in 2019.

It is not mandatory, but it requests related parties to ensure individuals are not disadvantaged from undesirable handling of their personal information by AI, to make fair and transparent decisions, and to be held accountable for the consequences.