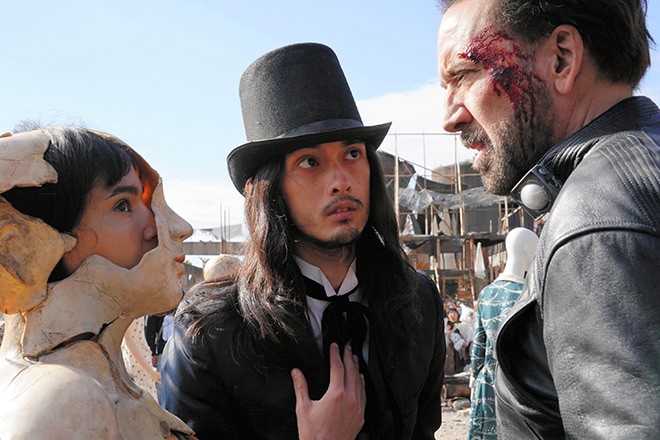 A scene from “Prisoners of the Ghostland” (Provided by Bitters End Inc.)

Sono, renowned for “Cold Fish” and “Why Don’t You Play in Hell?” among other violent and sexually explicit films, didn’t hesitate to get all he wanted from Cage, having his character wear only a “fundoshi” loincloth and get one of his testicles blown off.

“I wanted to make a movie like ‘Mad Max,’ filled with car stunts in a Mexican desert,” Sono says.

But while working on the project in 2019, the director suffered a heart attack.

“Nicolas told me that I should take it easy and make the movie in Japan, so my ideas changed drastically,” he says.

Though the production ended up being shot in Japan, the movie, which opened in Japan in October, retains a “Mad Max” feel.

Cage plays Hero, a bank robber who is arrested after he breaks into a bank in Samurai Town ruled by The Governor (Bill Moseley). The Governor promises to set Hero free if he brings back a woman (Sofia Boutella) who has escaped from his house. Hero then heads off to Ghostland, into which she has fled.

“Nicolas was fed up with playing handsome characters,” Sono says. “He was kind of a person who enjoyed playing an embarrassing but comical role.”

The director found he had to deflect attempts to interfere from U.S. producers, but Cage stepped in and saved the day.

“I had friction all the time, but Nicolas told them to let me do whatever I wanted,” he says.

The movie is packed with eye-catching kitsch in the form of the sets of Samurai Town and Ghostland, while no CGI was used to shoot its action sequences.

“Having seen Hollywood movies for many years, I was sick of movies made with CGI. I went for real sets and effects even though they may look a little cheap,” Sono says. “It may be badly made, but it’s unique. That’s how I’ve been living my life, and that’s how I wanted this movie to be.”

Even though the film functions as pure entertainment, it has underlying themes of freedom, order, power and religion, all of which the director has explored in his previous films.

He may be taking a more overtly serious turn in his future work.

“My next Hollywood project will be a solemn movie to dig deep into the question of human freedom,” Sono says.