Students can send bullying SOS on tablets in Osaka schools 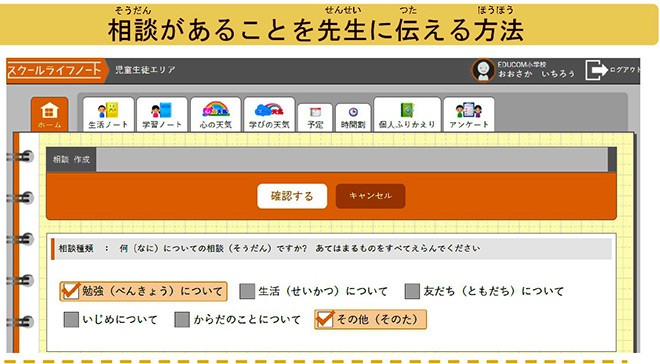 A special consultation function was added to school tablet computers to report bullying and other problems in the schools. (Provided by the Osaka city’s board of education)

OSAKA--Students can discreetly report cases of bullying to their teachers in Osaka city schools starting Oct. 29 with a simple tap on their school-provided tablet computers.

The Osaka city board of education added the special function to allow children to notify teachers of bullying in the city’s elementary and junior high schools.

“I hope that this can be a good chance for children who hesitate to talk face to face with their teachers," said a board of education official.

Tablet computers are provided for each student in elementary and junior high schools across Japan.

Osaka city school officials are seeking to create an environment where students can send an SOS without hesitation on their devices.

According to the education ministry, it is unusual in Japan for such a service to be offered to students on their supplied tablets.

The Osaka city board of education said the consultation function was added to the area where students record their school activities.

If a student taps the “consultation” button, several kinds of consultations, including “bullying,” “life (school or home)” and “studies,” will be displayed.

If the student chooses any one of them, all teachers in a school will be notified. The portability of the tablet will allow students to even report problems while away from school.

“Some children who hesitate to raise their hands in class could talk on the computer chat during online learning,” said an Osaka city elementary school principal. “We would like to promote this function widely.”

However, another elementary school principal cautioned, “If all teachers in the school are notified of their consultation requests, some children could be hesitant about doing so.”

The board of education is asking teachers at each school to check on consultation notifications at least once a day and is urging them to talk to such students.

Currently, students through the service are unable to type in what they want to consult about or choose the teacher they wish to talk to. Such functions are planned to be added in fiscal 2022 or later.

The problem of bullying in the schools has emerged as a major problem in schools across Japan.

According to the education ministry, the number of students in elementary schools and junior and senior high schools who took their own lives totaled 415 in fiscal 2020, the highest since such figures were kept.

The schoolgirl's parents complained of slanderous comments posted on the chat function of the computer tablets distributed by her school. This case raised questions over how to use such a tablet computer.