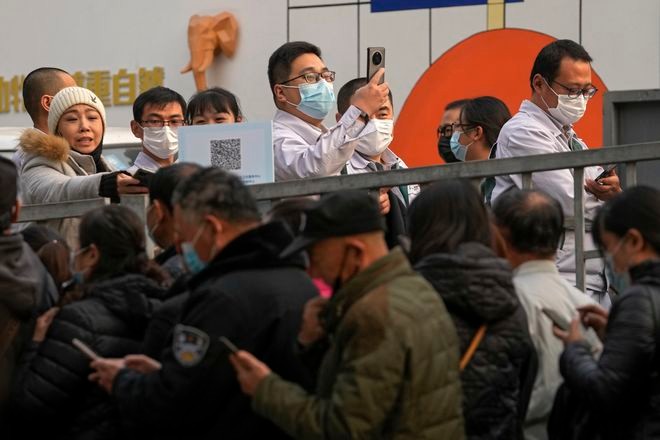 Service sector workers wearing face masks to help curb the spread of the coronavirus line up during a mass COVID-19 testing in Beijing, on Oct. 29, 2021, following a spike of the coronavirus in the capital and other provincials. (AP Photo)

SHANGHAI--Mainland China recorded its highest number of daily local new COVID-19 infections in more than six weeks on Friday, as the country battles an outbreak concentrated mainly in its northern provinces.

China reported 59 new locally transmitted infections for Oct. 29, the National Health Commission said on Saturday, up from 48 a day earlier. It was the highest number of new local infections since Sept. 16.

Most of the new local cases were in northern China, with infections reported in Heilongjiang, Inner Mongolia, Gansu, Beijing and Ningxia.

Including infections imported from overseas, China recorded 78 new COVID-19 cases for Oct. 29, up from 64 cases a day earlier. China also reported 24 new asymptomatic cases, which it classifies separately from confirmed cases, up from 23 a day earlier.

There were no new deaths, leaving the death toll unchanged at 4,636.

Although the tally is tiny compared with infections elsewhere in the world, recent widespread outbreaks have forced officials to toughen restrictions, squeezing the service sector, including tourism and catering companies.

China's border towns, faced with a higher risk of infection from overseas and with relatively few resources, have tended to suffer more severe disruptions than richer cities.

In Inner Mongolia, the government in Ejina Banner, a remote administrative division on China's border with Mongolia, said it would transfer more than 9,400 stranded travellers to low-risk areas in the coming days, the official China Daily reported.

Ejina Banner has been hard-hit by the latest outbreaks and went into a lockdown last week. Eighteen of China's new local COVID-19 infections reported on Saturday were in Alxa League, a prefecture-level division containing Ejina Banner.