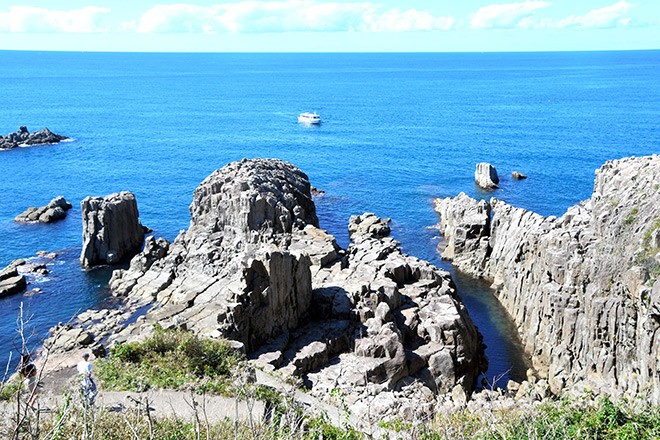 SAKAI, Fukui Prefecture--Yukio Shige has a simple message for politicians, especially those contesting the Oct. 31 Lower House election: “Listen to the screams of the 744 people.”

The figure cited constitutes the number of people the 77-year-old Shige and other volunteers in his group have stopped from jumping to their deaths from the Tojinbo cliffs here.

The coastal outcrops rise to about 20 meters and stretch for 1 kilometer.

Shige formed the group after he retired as a police officer. He and other group members take turns patrolling the Tojinbo cliffs, a popular tourist attraction in Fukui Prefecture, six days a week from 11 a.m. until sunset. The patrols began in April 2004.

Shige was at Tojinbo in mid-August around 6 p.m. when he came across a middle-aged man sitting on the rocks. Shige deliberately sat in front of the man to block his view of the ocean.

“Did you come here to die?” Shige asked the man, who nodded in acknowledgement but otherwise stayed silent.

The man later divulged that he lived in the Kanto region but had lost his job working at an airport in the labor shakeup triggered by the novel coronavirus pandemic. Shige contacted the man’s brother and asked police to protect the man.

This year alone, Shige’s group has stopped 40 or so individuals from committing suicide. Based on his observations, Shige noted that it normally takes a year or two after a major natural disaster, or in this case the pandemic, before people start visiting Tojinbo to end it all.

In addition to near-daily patrols of the steep cliffs, Shige’s group also began taking consultations over the phone or by email from July 2020.

One student talked about the difficulties in getting along with friends after schools closed for a prolonged period due to the COVID-19 crisis.

Another said, “Every day is very difficult for me because my family has no understanding of my depression.”

The group has been getting at least one call or email a day from people with compelling problems.

Shige regards those who plan to take their lives as “victims” of a social structure that does not provide sufficient support. To get help at a local level, a person is required to fill out all sorts of forms.  Consulting with lawyers and other experts can be costly.

Based on his experiences, Shige said he suspects many people contemplating suicide simply crave a chance to make a fresh start but don't know where to turn to.