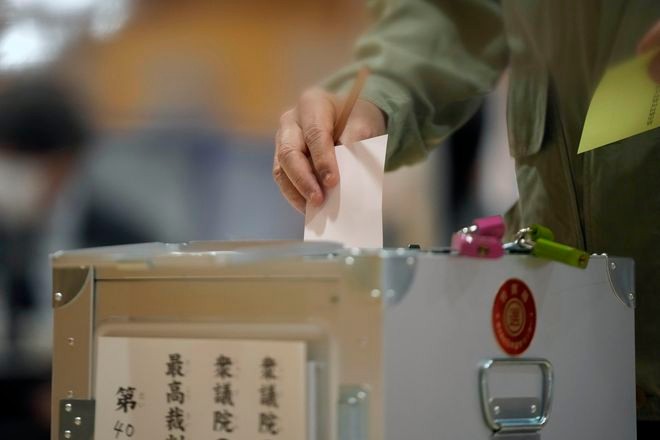 A voter casts a ballot in the Lower House elections at a polling station in Tokyo on Oct. 31. (AP Photo)

Japanese voters are casting ballots in national elections Sunday, a first big test for Prime Minister Fumio Kishida to determine if he has a large enough mandate to tackle a coronavirus-battered economy, a fast-aging and dwindling population and security challenges from China and North Korea.

Up for grabs are 465 seats in the Lower House, the more powerful of the two-chamber Japanese Diet, or parliament.

Kishida's governing Liberal Democratic Party is expected to lose some seats from pre-election levels, but maintain a comfortable majority together with its junior coalition partner Komeito.

Kishida, 64, was elected prime minister on Oct. 4 after winning the leadership race in his ruling party, as its conservative leaders saw him as a safe status-quo successor to Yoshihide Suga and his influential predecessor Shinzo Abe.

Kishida’s immediate task has been to rally support for a party weakened by Suga’s perceived high-handed approach to pandemic measures and his insistence on holding the Tokyo Summer Olympics despite widespread opposition.

Kishida dissolved the Lower House only 10 days after taking office, calling for this election and declaring that he wanted a mandate from voters for his new government before getting to work.

The short, 17-day campaign period that followed the LDP leadership race, which had dominated media coverage, unfairly gave Kishida's party an advantage over the opposition, some experts say.

Kishida’s long-term grip on power will depend on how well he does in the election.

Kishida repeatedly stressed his determination to listen to the people and to address criticism that the nine-year Abe-Suga leadership had caused corruption, tamed bureaucrats and muzzled opposing opinions.

The campaign has largely centered on COVID-19 response measures and revitalizing the economy.

While Kishida’s ruling party stressed the importance of having a stronger military amid worries over China’s growing influence and North Korea’s missile and nuclear threat, opposition parties focused on diversity issues and pushing for gender equality.

Opposition leaders complain that recent LDP governments have widened the gap between rich and poor, did not support the economy during the pandemic and stalled gender equality and diversity initiatives.

Kishida has set a modest goal for the LDP and its coalition partner Komeito. He wants to jointly keep their majority, which would be 233 seats in the 465-member Lower House. That's a low bar, considering that the LDP alone had 276 seats before the election. A big drop, even if the party keeps its majority, would be a bad start for Kishida’s weeks-old administration.

Media polls suggest the LDP is likely to lose seats, in part because five opposition parties formed a united front to unify candidates in many small electoral constituencies and are expected to gain positions there.

If, as many predict, the ruling coalition wins around 261 seats, they could control all parliamentary committees and easily push through any divisive legislation.

Most results are expected by early Monday.

The opposition has long struggled to win enough votes to form a government after a brief rule of the now-defunct center-left Democratic Party of Japan in 2009-2012.

On the economy, Kishida has emphasized growth by raising incomes, while opposition groups focus more on redistribution of wealth and call for cash payouts to pandemic-hit low-income households.

Of the 1,051 candidates, only 17 percent are women, despite a 2018 law promoting gender equality in elections, which is toothless because there is no penalty. Women account for about 10 percent of parliament, a situation gender rights experts call “democracy without women.”