LDP on its way to an outright majority, Japan exit polls show 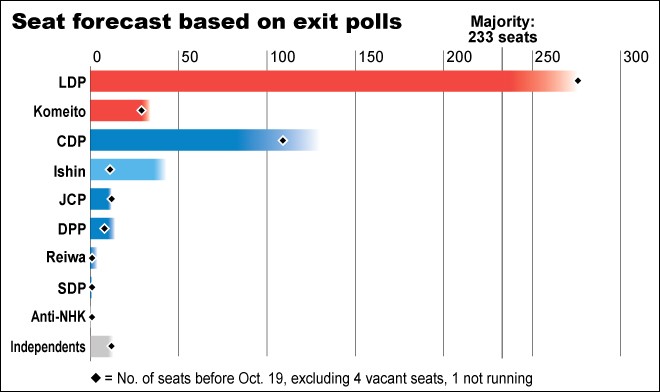 The ruling Liberal Democratic Party is on course to gain an outright majority in the Lower House election held Oct. 31, a clear sign that stability was much on the minds of voters in giving new Prime Minister Fumio Kishida a four-year mandate to govern.

However, exit polls conducted by The Asahi Shimbun showed the LDP will lose a number of single-seat districts as a result of the united front put up by the opposition camp.

Junior coalition partner Komeito is expected to reach the 29 seats it held before the election.

The exit polls also indicated a number of possible outcomes for the opposition parties.

The main opposition Constitutional Democratic Party of Japan was in line to win about the same number of seats it held before the election, 109.

But Nippon Ishin (Japan Innovation Party) was set to greatly increase the number of its seats from its pre-election strength of 11.

The Japanese Communist Party was expected to win about the same number of seats as it held before the election, but the Democratic Party for the People was in line to gain a few more than the eight seats it held.

Although Reiwa Shinsengumi might add to its one seat held before the election, there was doubt as to whether the Social Democratic Party could hold onto its one seat. A party initially set up as a protest movement against Japan Broadcasting Corp. (NHK) was not expected to gain a seat.

About 12 independents were expected to win seats.

Voters at 8,670 polling stations in the 289 single-seat districts were asked who they voted for after they cast their ballots.