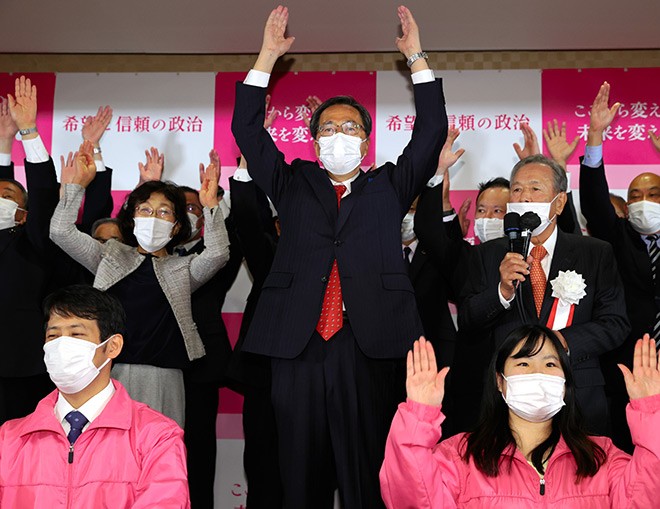 Tetsuo Saito, center, celebrates with his supporters after media reports showed he was heading to victory in the Hiroshima No. 3 district. (Jun Ueda)

There were the usual election upsets and some surprises as voting in the Oct. 31 Lower House election pointed to a major victory for the ruling Liberal Democratic Party.

For example, attention on the Hiroshima No. 3 district prior to voting day largely concerned a money scandal that resulted in a husband-and-wife pair of LDP lawmakers resigning their seats.

But exit polls showed the seat will remain in the hands of the ruling coalition as Tetsuo Saito of junior coalition partner Komeito was set to win it.

The seat was formerly held by Katsuyuki Kawai of the LDP when he served as justice minister, but he was indicted on vote-buying charges stemming from the 2019 Upper House election of his wife, Anri. Both were found guilty and gave up their seats.

The strong united front put up by the opposition parties resulted in the defeat of an LDP faction leader, Nobuteru Ishihara, a former LDP secretary-general and the son of former Tokyo Governor Shintaro Ishihara.

He lost in the Tokyo No. 8 district to Harumi Yoshida of the main opposition Constitutional Democratic Party of Japan. But Nobuteru Ishihara was expected to retain a Lower House seat because he was also included in the LDP’s proportional representation constituency in the Tokyo bloc.

Yoshida gained the support of other opposition parties, such as the Japanese Communist Party and Reiwa Shinsengumi, in the one-on-one battle with Ishihara.

A similar contest in Shikoku also led to the defeat of a former Cabinet minister.

Takuya Hirai, the state minister in charge of digitalization under Kishida’s predecessor, Prime Minister Yoshihide Suga, before he resigned in September, lost in the Kagawa No. 1 district to Junya Ogawa of the CDP.