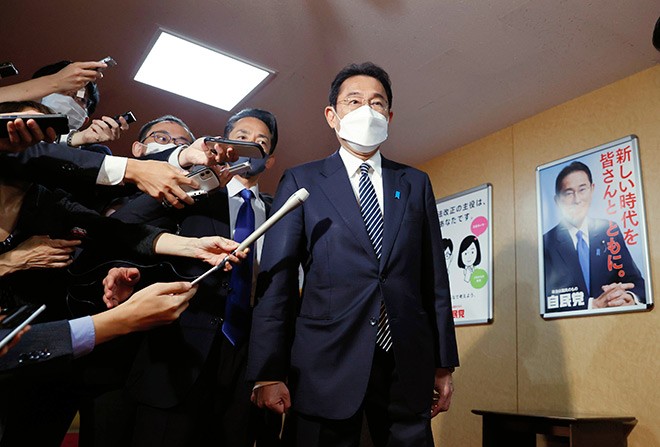 Prime Minister Fumio Kishida enters the headquarters of the Liberal Democratic Party on Nov. 1, the day after the Lower House election. (Ryo Ikeda)

Prime Minister Fumio Kishida breathed a sigh of relief while opposition leader Yukio Edano was left scratching his head for answers after the results of the Lower House election came in.

Kishida’s Liberal Democratic Party won 261 seats in the Oct. 31 vote to secure a majority in the 465-seat Diet chamber.

Some earlier reports indicated that the LDP was struggling, but in the end, the party maintained its control over the government.

“Voters gave us full support by electing LDP candidates to capture a majority of seats,” Kishida said as the results kept coming in. “I want to concentrate on governing.”

Although the LDP lost around a dozen seats compared with its pre-election strength, it won an absolute stable majority that will allow it hold the posts of chairs of all standing committees in the Lower House.

And together with Komeito, which secured 32 seats in the vote, the ruling coalition won 293 seats, up by two, in the election.

Kishida will be elected as prime minister again in an extraordinary Diet session expected to convene early this month. He is poised to have a supplementary budget for the current fiscal year passed in the Diet early in December to implement measures to shore up the nation’s economy.

The most stunning loss was Akira Amari, who holds the No. 2 post in the party. He became the first sitting LDP secretary-general to lose in a single-seat district, the Kanagawa No. 13 district. However, Amari was listed high on the party’s candidate list, enabling him to secure a Lower House seat through the proportional representation segment.

Amari, who was appointed secretary-general only about a month ago, has conveyed his intention to resign.

Nobuteru Ishihara also lost in the Tokyo No. 8 district. Ishihara, a former LDP secretary-general, could not make it to the Lower House through proportional representation.

The main opposition Constitutional Democratic Party of Japan suffered a setback by ending up with 96 seats, 13 fewer than its pre-election strength of 109.

“I cannot help admitting that the party still needs to work more to broaden its support base,” CDP leader Edano said.

But he indicated that he will remain as party chief.

“Thinking only of the immediate future would lead the party to repeat the same mistake,” he said.

The CDP performed better in electoral districts than in the previous Lower House election four years ago, mainly because of its cooperation with four other parties to field unified candidates in 217 of the 289 single-seat districts.

It was the first such opposition endeavor in a Lower House election aimed at preventing a dispersion of votes among supporters of the opposition camp.

The CDP entered candidates in more than half of the electoral districts to try to wrest power from the LDP.

But the cooperation strategy could not generate the intended results.

And the CDP also could not lure voters in the proportional representation segment, resulting in a decline in the party’s overall strength.

The other opposition parties in the cooperation alliance were the Japanese Communist Party (JCP), the Democratic Party for the People (DPP), Reiwa Shinsengumi and the Social Democratic Party.

Nippon Ishin (Japan Innovation Party), which kept a distance from the opposition alliance, made a big leap, raising its seats to 41 from 11 and becoming the third largest force in the chamber after the LDP and the CDP.

Nippon Ishin has its sights set on the Upper House election next summer as a party plans to further extend it reach beyond its power base of the Kansai region.

Komeito won in all nine electoral districts its candidates entered. It also garnered seats in all 11 proportional representation blocs.

The DPP gained three seats for 11 in the Lower House, while the JCP saw its Lower House strength slip from 12 seats to 10.

The SDP maintained its one seat that it had before the election.

Taro Yamamoto, head of Reiwa, captured a seat in the proportional representation bloc in Tokyo.