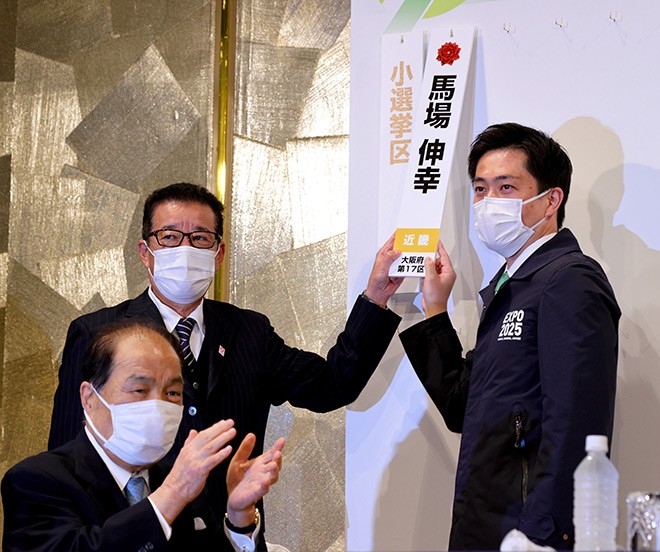 Osaka-based Nippon Ishin (Japan Innovation Party) proved the biggest winner among opposition parties in the Lower House election but said it has no plans to form any sort of political alliance.

Nippon Ishin increased its number of Lower House seats from 11 to 41, making it the third largest party in the Diet chamber following the Oct. 31 vote.

“We continued to say that structural reforms are necessary for Japan,” Matsui said at a party conference venue in an Osaka hotel on the night of Oct. 31. “We received support for that, which led to an increase in our seats.”

Nippon Ishin’s policies have been focused primarily on issues in the Kansai region, including two unsuccessful referendums to turn the Osaka area into a metropolis like Tokyo.

Yoshimura has gained national attention for his responses to the COVID-19 pandemic. And both he and Matsui are known to openly criticize the policies of the central government.

In the election, the party was able to gain support from swing voters and people who do not back either the ruling coalition of the Liberal Democratic Party and Komeito or the unified opposition parties.

Nippon Ishin fielded 96 candidates, nearly double the number from the election four years ago, and set a target of ending the majority held by the LDP.

The party highlighted Yoshimura in stump speeches and election broadcasts.

Yoshimura established the “Osaka model” as a standard for anti-coronavirus measures ahead of other prefectures. He also prepared large-scale temporary medical facilities for surges in the number of COVID-19 patients.

He won favor from the public for blasting the central government’s responses to the pandemic.

Many voters gathered for the party’s campaign speeches.

“We are not fighting against Nippon Ishin candidates but against Yoshimura’s popularity,” an opposing candidate said.

Matsui built a good relationship with former Prime Minister Yoshihide Suga, but the mayor still poked holes in the LDP’s way of ruling.

“It is difficult for the LDP to ease regulations because it does politics for various kinds of support groups,” Matsui said.

Nippon Ishin has been seen as a potential partner of the LDP, given that some of its conservative policies are more in line with those of the ruling party.

But Matsui said, “We will never be aligned with the LDP” even after the election.

He also said his party will not join the opposition bloc that formed for the election because of disagreements in diplomacy and national security issues.

“The opposition alliance was formed only for the election,” Matsui said.

Nippon Ishin also capitalized on other parties’ failures in the election.

In Osaka Prefecture, a lawmaker who had left the LDP due to a scandal decided not to run in the election. In another electoral district, the LDP and Komeito could not cooperate smoothly in fielding candidates.

It has been 11 years since the regional Osaka Ishin party was established by popular TV celebrity-turned-politician Toru Hashimoto.

The party’s members now include the Osaka governor and the mayors of 16 of the 43 municipalities in the prefecture.

With its foothold secured in the Osaka area, the Lower House election was seen as the party’s new step in seeking support from across the nation.

“The party has been bracing for such strong momentum since the days of Toru Hashimoto,” a Nippon Ishin official said.