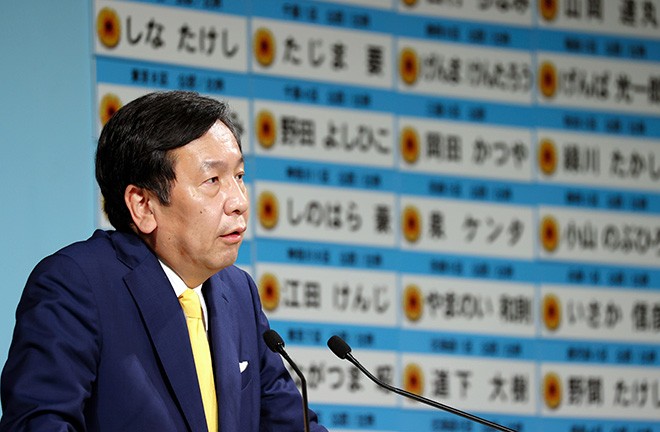 In the gloom of a Lower House election post-mortem, the main opposition Constitutional Democratic Party of Japan was forced to ponder whether joining forces with the Japanese Communist Party was the right thing to do.

That collaboration further comes into question with an Upper House election looming on the horizon by next July.

Rengo (Japanese Trade Union Confederation), which is CDP’s support base, has been unhappy about the CDP including the JCP in the opposition bloc’s novel efforts to field a slate of unified candidates in the Oct. 31 election.

However, Yukio Edano, leader of the CDP, put a positive spin on the cooperation among the opposition camp at a news conference on the night of Oct. 31.

“We could generate certain results as our candidates fought neck and neck in electoral districts where the Liberal Democratic Party is supposed to have a robust base,” Edano said.

The most spectacular success came when its two rookies defeated LDP heavyweights.

But CDP bigwigs also lost in electoral districts--for some, a first in their long political career.

Ichiro Ozawa and Banri Kaieda, who both headed the Democratic Party of Japan, the CDP’s predecessor, were defeated, but they will return to the Diet through the proportional representation segment.

Former construction minister Kishiro Nakamura, Kiyomi Tsujimoto, deputy leader of the CDP, and Hirofumi Hirano, election campaign chief of the CDP, failed to gain seats in the single-seat constituency. But only Nakamura could make it to the Diet through proportional representation.

A development symbolizing CDP veterans’ struggle is Edano’s race. His victory became certain only after midnight, showing the tight contest even the party leader was forced to engage in.

The CDP added nine more seats in electoral districts at the end of the day, compared with pre-election strength of 48.

But the party’s overall showing of 96 seats, which includes seats won in the proportional representation segment, fell far short of the approximately 140 that is the benchmark for threatening the LDP’s single-party control of the Lower House.

One reason the CDP failed to make progress could be that its decision to work with the JCP backfired, according to some analysts.

Edano was originally cautious about working with the JCP, but he finally climbed aboard when the JCP pressed for shared policies and election cooperation.

In late September, Edano made it clear that if the CDP took power, the JCP would cooperate even if its lawmakers do not join the administration.

There are many trade unions in Rengo that oppose the CDP’s cooperating with the JCP. Their reluctance to rally behind unified opposition candidates could be a factor behind their narrow losses in some districts.

However, the CDP’s woes may run deeper than the JCP’s involvement. The CDP has been unable to raise its appeal to voters in recent years, with its support rate hovering around 5 percent.

In an Oct. 19-20 survey by The Asahi Shimbun, 54 percent of respondents said Prime Minister Fumio Kishida of the LDP is fit to serve as prime minister, while only 14 percent backed Edano.