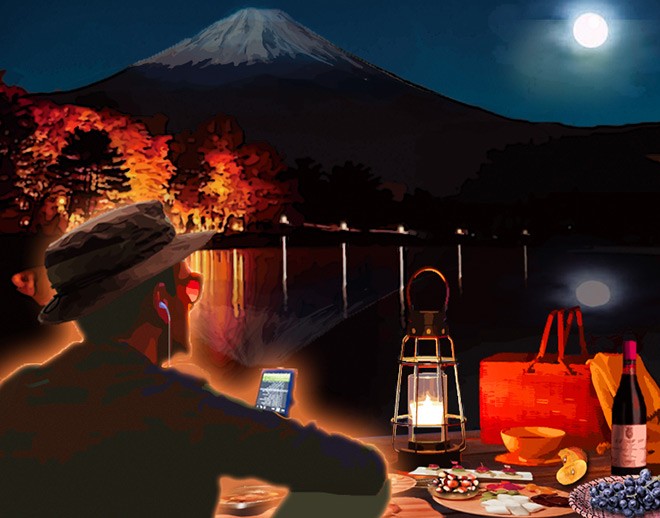 a fruit stall
where I can buy
the red planet
--Yasir Farooq (Karachi, Pakistan)

it is not me
beneath the crabapple tree
an old man
--Albert Schepers (Windsor, Ontario)

temptation
the preacher
says it couldn’t have been an apple
--Wilda Morris (Chicago, Illinois)

The haikuist spent a great autumn day, he said, “singing in a park with friends on a glorious sunny day.” They likely crooned Dean Martin’s 1953 love song that begins, “When the moon hits your eye like a big pizza pie, that’s amore.” Satoru Kanematsu heard that the moon is made of green cheese. Germina Melius picked apples in Castries, Saint Lucia.

Topping on
my big pizza pie…
a full moon

apple pie...
scent of mom
in every room

tangy lemon tart
the child I have
never been

Green apple
if I could retrieve
my boyhood

At home in Kerala, India, Lakshmi Iyer tried to explain how a good farmer first grasps the ripe fruit in the hand before gently twisting its stem from the sky. Slobodan Pupovac admired a bumper citrus crop in Zagreb, Croatia.

full moon
hidden by the canopy
of ripe lemon

The pandemic has changed drinking and dining etiquette. Teiichi Suzuki now sprays his hands with alcohol at the bar where he once used a freshly steamed and scented towel to wipe his hands clean before drinking from precious jade-green glazed porcelain. Richard L. Matta looks forward to dipping his fingers in a washbowl after a fine meal in San Diego.

Savoring
sake and universe
in a celadon cup

pottery studio
kneading the clay
for our lemon bowl

Melius loves storytelling; the gifted author published “The Apple Tree,” a collection of 11 heart-breaking short stories. Junko Saeki whispered lyrics by Michiko Namiki (1921-2001): “With my lips close to a red apple, I gaze into the blue skies in silence”

one bite from an apple
the homeless man
finds heaven

Yutaka Kitajima warned that wild boars and bears are on the prowl in Joetsu, Niigata Prefecture; rewilding is replacing the dwindling human population. White-tailed deer ventured out of the deep woods in Peterborough, Ontario, to check Sue Colpitts’ rewilded orchard.

Lee responded to the embargo of Taiwan’s pineapples last spring and its apples this autumn with a haiku.

Eat wax apples
The unsellable delicacies
of farmers in trouble

Goran Gatalica mourned at home in Croatia; three weeks later he watched as the farm was sold.

after her funeral...
sheltered in quarantine
new moon

Liz Gibbs reported on a casualty during a war to protect a farm from marauders in Calgary, Alberta.

soldiers at war...
women mow wheat
thinking of the enemy

ghost stories
around the campfire
billows of smoke

Autumn fog--
looking for an exit
from self-isolation

Daneva contemplated taking the plunge in The Netherlands.

one on one
mid-bridge
the ripples and I

Dozens of Dutch tried to paddle across the North Sea to England during World War II, unfolding skin-on-frame kayaks made of woven fabric and birch trees on beaches in the dead of night. Ravaglia navigated an eddy in Bologna, Italy. J.L. Huffman commemorated the anniversary of the Nov. 7, 1811, Battle of Tippecanoe with a haiku.

nutshell...
still on the rapids
my canoe

kayakers
wrestle the rapids-battle
of Tippecanoe

Bob Friedland has bicycled every day since he returned from duty overseas.

After the war, I
Had a repainted red bike,
With fleece seat, and solid tires

the lemon
she squirts on her breasts
after cutting fish

apple red--
a twist of citrus
in the eye

Satsuki Azalea
The shy face turned red
As the blossom

Stoianka Boianova was surprised by what peered out from grapevines in Sofia, Bulgaria. Mona Bedi in Delhi, India, and Anne-Marie McHarg in London, England, respectively, enjoyed a glass filled with the taste of autumn fruits. Torontonian Marshall Hryciuk celebrated a change of address on his mailing labels.

that red merlot
with a blue butterfly label
takes ice-cubes

The 11th Setouchi-Matsuyama International Photo-Haiku Contest supported by The Asahi Shimbun offers readers the chance to win a prize for taking photos and writing haiku about the sea. Enter online until Jan. 12: (http://matsuyamahaiku.jp/contest/free_eng/entry/).

The next issue of the Asahi Haikuist Network appears Nov. 19. Readers are invited to send haiku related to COP26, the United Nations Climate Change Conference, on a postcard to David McMurray at the International University of Kagoshima, Sakanoue 8-34-1, Kagoshima, 891-0197, Japan, or by e-mail to (mcmurray@fka.att.ne.jp).