Kishida to pick Motegi to replace Amari as No. 2 in ruling LDP 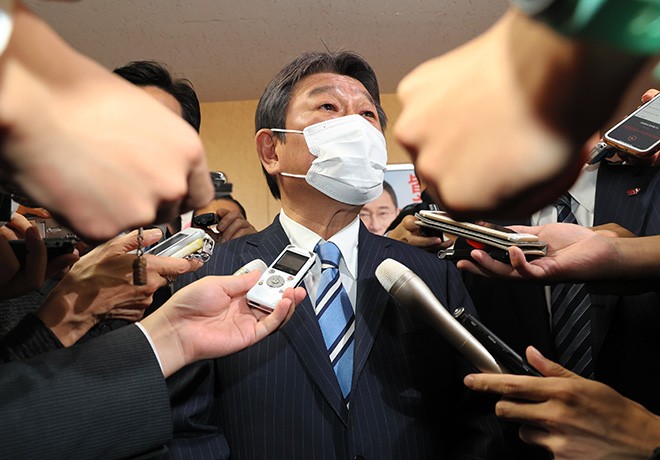 Motegi, 66, is currently the foreign minister in Kishida’s Cabinet.

Amari said on Nov. 1 that he twice informed Kishida of his intention to resign as LDP secretary-general after losing in a single-seat constituency in the Oct. 31 Lower House election.

“Amari would like me to decide on whether to accept his resignation or not,” Kishida said at a news conference on the afternoon of Nov. 1. “After I discuss the issue with him, I would like to make a decision on what to do about his wishes as soon as possible.”

Amari became the first LDP secretary-general, the No. 2 post in the party, to lose in a single-seat race since 1996, when the current election system for the Lower House was introduced.

He was defeated by Hideshi Futori, a rookie candidate of the Constitutional Democratic Party of Japan, in the Kanagawa No. 13 district.

However, Amari still gained a Lower House seat through the proportional representation section of the election.

At the LDP headquarters in Tokyo on Nov. 1, Amari told reporters that he had first mentioned his desire to resign to Kishida when it became clear that he was heading for defeat in his district.

Kishida reportedly said, “I would like to consider it in a couple of days.”

On the morning of Nov. 1, Amari again conveyed his intention to resign to the prime minister.

Amari was a part of the so-called 3As, along with Shinzo Abe and Taro Aso, who are widely believed to have cemented Kishida’s victory in the LDP presidential election in late September.

His appointment as secretary-general was seen as a reward for his support in the LDP election.

But Amari immediately came under fire over a money scandal that forced him to resign as economic revitalization minister in January 2016.

Opposition parties criticized Amari for not fully explaining his involvement in the scandal over dodgy political funds and failing to take responsibility.