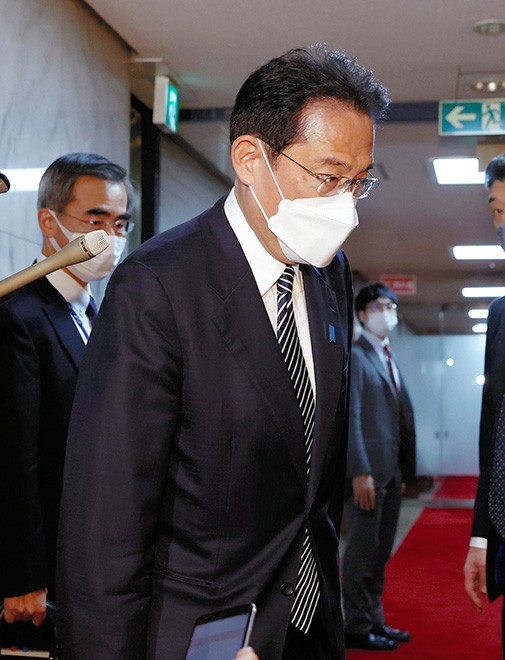 Now that the Oct. 31 Lower House election is over, Prime Minister Fumio Kishida will face challenges of how to tackle diplomatic and security issues amid a tug of war between the United States and China.

He also needs to lay out Japan’s new defense policy to deal with the military buildups and technological advances posed by China and North Korea.

Kishida expressed his willingness to visit the United States at an early stage to build a relationship with U.S. President Joe Biden in a TV program aired by Japan Broadcasting Corp. (NHK) on Oct. 31.

“Japan-U.S. relations are the foundation of Japan’s diplomacy, so I’d like to visit the United States as soon as possible to hold summit talks (with Biden),” said Kishida.

A joint statement released by the two countries in April, when Kishida’s predecessor, Yoshihide Suga, was in office, expressed Japan’s resolve to bolster its own national defense capabilities to further strengthen the alliance with the United States.

During campaigning for the Lower House election, the ruling Liberal Democratic Party called for a sharp increase in defense spending to drastically enhance Japan’s defense capabilities.

The nation’s defense spending has been rising since former Prime Minister Shinzo Abe started his second term in office, but the defense budget per share of GDP has remained below 1 percent.

Kishida says he does not have a specific defense spending target, but he is under pressure from his party to boost the expenditure. It remains to be seen whether the defense budget will exceed the 1 percent threshold in a budget for the next fiscal year to be compiled in late December.

The United States and China are competing with each other in securing supply chains for semiconductors and other goods.

Both Japan and the United States have the urgent task of ensuring economic security as it is becoming more important than ever to secure supply chains for semiconductors and prevent leaks of sensitive technology to other countries, particularly China.

Kishida has instructed government officials to start discussing possible revisions to the National Security Strategy (NSS), which was compiled in 2013. He is also aiming to enact a law on promoting economic security.

But there are many issues to be discussed, including what needs to be regulated. Business leaders are also expressing concerns that cutting China off from Japan’s supply chain could result in souring bilateral relations.

Along with a review of the NSS, Kishida intends to start a full-fledged discussion on revising the National Defense Program Guidelines, which set a basic outline for Japan’s national security policy.

The main focus of the discussion is whether Japan should possess the capabilities to strike enemy bases. Since the LDP’s junior coalition partner, Komeito, remains cautious about the idea, it is unclear whether further discussion will occur on the issue.

Kishida also needs to improve Japan’s ties with China as next year will mark the 50th anniversary of normalizing relations between the two nations.

During talks over the phone on Oct. 8, Chinese President Xi Jinping agreed with Kishida’s comments that the two countries should work together to build constructive and stable bilateral ties.

Kishida and Xi also confirmed that they will encourage exchanges between the people of the two countries in a number of areas, including business.

But the LDP is alarmed by China’s increased maritime activities around the disputed Senkaku Islands in the East China Sea.

Some LDP members also continue to oppose a state visit to Japan by Xi that was initially scheduled for April 2020, but postponed due to the COVID-19 pandemic.

Japan has even more challenges when it comes to improving relations with South Korea.

A senior Foreign Ministry official said Kishida cannot easily compromise on the issue of so-called “comfort women,” who were forced to provide sex to Japanese soldiers before and during World War II, given that Kishida was foreign minister when the two governments struck an agreement on the matter in 2015.

Leaders of the two countries are expected to resume dialogue only after a new South Korean president takes office in spring next year.

As for North Korea, Kishida is continuing with his predecessors’ stance of being open to a meeting with North Korean leader Kim Jong Un without preconditions, but Kishida has yet to offer how he intends to seek dialogue with the country.

(This article was written by Naoki Matsuyama and Ryo Aibara.)