VOX POPULI: Amari falls from LDP’s No. 2 post, despite ties to storied strategist 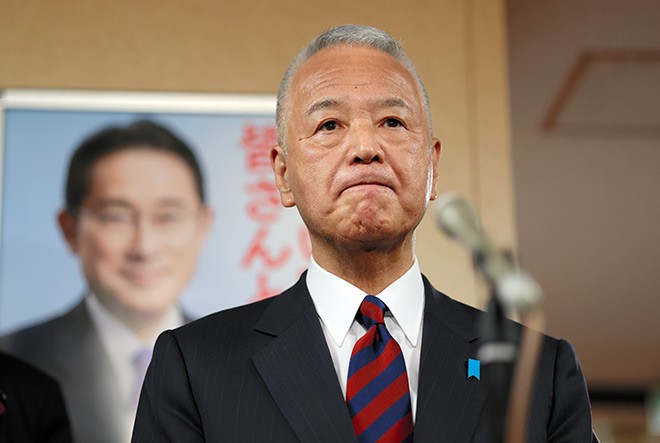 Feudal warlord Takeda Shingen (1521-1573) was served by a squad of influential retainers who later came to be known as his “24 Generals.”

Among them was Amari Torayasu, a brilliant military strategist who contributed to Shingen’s successes in battle, and the two were said to be related.

Akira Amari, a lawmaker of the ruling Liberal Democratic Party, introduces himself as a descendant of Torayasu on his official website.

“My ancestors were Takeda’s descendants (It’s true). I am a descendant of Amari Torayasu, Shingen’s relative and his No. 2 vassal.”

He goes on: “It’s known as a historical fact that on the battlefield, it only took the battle cry of ‘Amari unit, forward!’ to get the enemy to retreat.”

Amari lost in his own constituency in the Lower House election on Oct. 31 and intends to resign from the post of LDP secretary-general.

He managed to secure a seat in the proportional representation portion to serve his 13th term in the lower chamber.

His defeat in his single-seat district owed to an alleged money scandal, which came back to bite him after originally surfacing in 2016.

The secretary-general, the second most powerful post in the LDP, directs the party’s election campaign strategy.

Amari also played a key role in the election of Fumio Kishida as party president and is known as one of the “3A” politicians, with the two other heavyweights being Shinzo Abe and Taro Aso.

Nationwide, the LDP put up a solid performance in the election. But the failure of the party executive in charge of overall election affairs to win the trust of his own constituents is hardly welcome news.

In search of footprints left by Amari’s storied ancestor known as a skillful warrior, I visited Kofu in Yamanashi Prefecture.

The city was abuzz with a festive atmosphere, as Nov. 3 happens to be the 500th anniversary of Shingen’s birth.

However, a signboard was all that marked the former site of Torayasu’s residence, and I almost missed it. The message on the signboard was poignant.

“He fought bravely but died in battle.”

Even though Amari retained his Lower House seat, his fate may be likened to a corporate vice president being demoted overnight to a rank-and-file employee.

Nothing is certain in battle. Power is ephemeral, indeed.