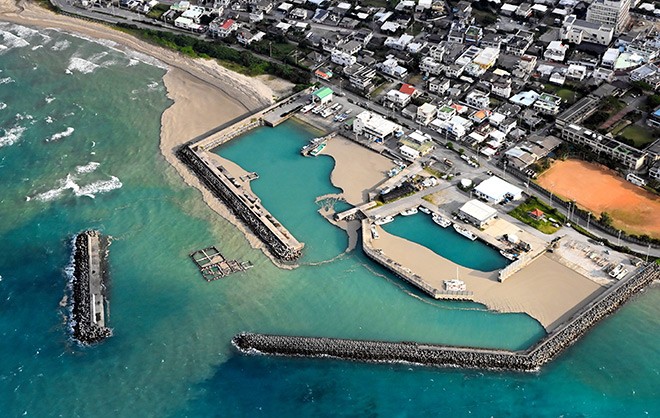 Huge rafts of pumice spewed by an undersea volcano have traveled some 1,400 kilometers and started lapping against the shores in southwestern islands of Okinawa and Amami, causing serious effects on social and economic activities.

Some experts predict that these porous, froth-like volcanic glasses from the Fukutoku-Okanoba volcano in the Ogasawara island chain will ride the Kuroshio current and drift toward the main Japanese islands of Kyushu, Shikoku and Honshu.

The central and local governments need to respond to the development as a “wide-area disaster” and work together to provide relief to affected communities and prevent the spread of damage.

The submarine volcano erupted in August, sending plumes of ash and gas up to a height of 16,000 meters. It was one of the biggest volcanic eruptions in Japan since the Meiji Era (1868-1912), according to the National Institute of Advanced Industrial Science and Technology.

The pyroclastic igneous rocks have turned into pebbles after floating on water and rubbing against one another for two months or so.

Banks of pumice have covered the surface of the sea along the coasts of Okinawa’s main and remote islands, clogging ports and disrupting the operations of fishing boats.

Large numbers of fish cultured in a pen have died after swallowing pumice pebbles, which they apparently mistook for food. This is a kind of disaster few people have anticipated.

Pumice can clog ships’ equipment and piping to draw in seawater to cool the engine.

A patrol ship of the Japan Coast Guard’s regional headquarters became stranded, and the operations of ferries and tankers have been affected.

Some remote islands have been hit hard as it has become difficult to purchase fuel oil used to generate power and access has been blocked for health care workers.

The situation is threatening the livelihoods, daily lives and health of many people and requires urgent responses.

The Okinawa prefectural government has started operations to remove pumice in fishing ports using heavy machinery. But the clean-up work is expected to take several weeks.

The central government plans to set up a special task force to support efforts to scoop up the pumice, secure the safety of ships and provide aid to damaged fishing businesses. It has also decided to use a disaster relief aid program to support work to restore the functions of affected ports.

In addition to effectively deploying human, material and financial resources to deal with the disaster, the government also needs to provide detailed and timely information.

Another major concern is that floating pumice could affect the operations of nuclear power plants.

The Nuclear Regulation Authority is urging electric utilities operating nuclear plants to determine whether rafts of pumice, if they approach their plants, could disrupt the systems to take in seawater to cool the reactors.

It goes without saying that the operators must carefully examine and assess the risk and make every possible effort to ensure the safety of their plants.

While pumice came from an underwater volcano, history shows that a major volcanic eruption could occur anytime on land in Japan, home to many volcanoes.

Volcanic ash, in particular, can cause damage in a wide swath of the nation. Roads and other transportation infrastructure, power transmission lines and electronic devices essential for our daily lives are all vulnerable to volcanic ash.

Last year, the government’s Central Disaster Management Council published a report on the effects of falls of volcanic ash in wide areas and possible measures to mitigate damage based on a model of a major eruption of Mount Fuji.

The pumice disaster should be used as an opportunity to assess and improve the nation’s preparedness for possible consequences of a massive volcanic eruption.