Tokyo exhibition delves into the creative mind of Hideaki Anno 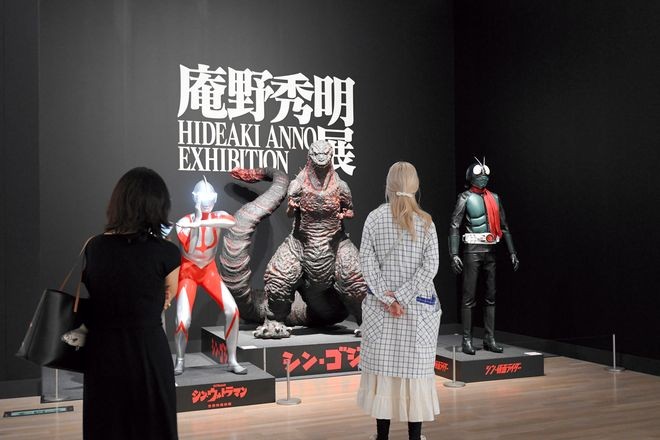 Statues of characters from films involving director Hideaki Anno are brought together at the National Art Center, Tokyo in the Roppongi district on Sept. 30 during a media preview. (Kenji Udagawa)

An exhibition in Tokyo traces the footsteps of anime and film director Hideaki Anno from his childhood to his current status as one of the most influential figures in the industry.

The Hideaki Anno Exhibition, currently held at the National Art Center, Tokyo in the Roppongi district, runs until Dec. 19. The Asahi Shimbun is among the organizers of the event, which will travel to venues in Oita, Osaka and Yamaguchi in 2022.

Renowned for his “Evangelion” anime series and live-action film “Shin Godzilla,” Anno started his career as an animator on Hayao Miyazaki’s film “Nausicaa of the Valley of the Wind” and other works in the 1980s.

His “Evangelion” series, which started as a TV show in 1995 and continued to this year’s feature film, “Evangelion: 3.0+1.0 Thrice Upon a Time,” has gained nationwide popularity over the past quarter century.

On display at the venue are at least 1,500 items, starting with models used for movies and TV shows featuring live-action “tokusatsu” special effects and superheroes in the 1960s and 1970s. These works had a defining creative influence on Anno when he was a child.

Other exhibits include storyboards, scripts, memos and other materials for his own productions, which are presented with actual scenes from his works.

More exhibits are being added during the event’s run.

“There are so many exhibits, and I fully enjoyed seeing what was inside the head of the genius, which was like a toy box,” he said.