Edano to resign as CDP leader over ‘insufficient abilities’ 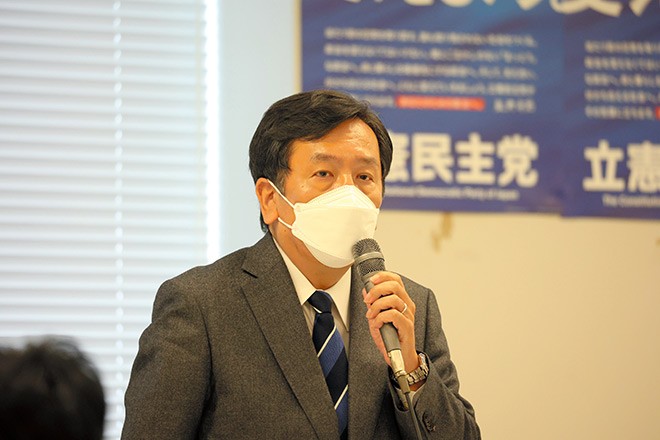 Yukio Edano announces his resignation as head of the opposition Constitutional Democratic Party of Japan at a Nov. 2 meeting of party executives. (Koichi Ueda)

Yukio Edano said Nov. 2 he would resign as leader of the Constitutional Democratic Party of Japan to take responsibility for the poor performance of the main opposition party in the Lower House election.

“The result is entirely due to my insufficient abilities,” Edano said at a meeting of party executives.

The CDP won 96 seats in the Oct. 31 Lower House election, a decrease of 13 from its pre-election strength.

Immediately after the election, Edano expressed an unwillingness to resign over the results.

But he said on Nov. 2 that he would step aside to let a new leader create a different party structure to contest next year’s Upper House election as well as the next Lower House election.

Edano will formally resign at the close of the special Diet session that will be held mainly to choose the prime minister.

The overwhelming majority won by the ruling coalition in the election means Prime Minister Fumio Kishida is certain to be picked to head the government.

Edano said he wanted the CDP to hold an election that party supporters could join to choose his replacement.

Edano was the main proponent of creating a united front among five opposition parties in the Lower House election. They backed the same candidate in 217 of the 289 single-seat districts to solidify votes against the ruling coalition candidates.

Although the cooperative strategy did lead to the defeat of a number of veteran ruling Liberal Democratic Party lawmakers, such as Secretary-General Akira Amari, the one-on-one contests in many of the districts also resulted in losses for CDP veterans.

Even Edano struggled to overcome the LDP candidate in the Saitama No. 5 district, squeaking by with a margin of only about 6,000 votes.

The CDP’s struggle to gain popularity was particularly noticeable in the proportional representation constituency, where voters choose parties, not candidates.

The combined vote total in that constituency for the CDP was about 11 million. It gained only 39 proportional representation seats, compared with 61 it held before the election.

Edano became party leader when the original CDP was established in 2017. The party increased its overall strength to about 150 lawmakers in September 2020 with the merger with some elements of the Democratic Party for the People.

But it consistently fell well behind the LDP in national surveys about party support.