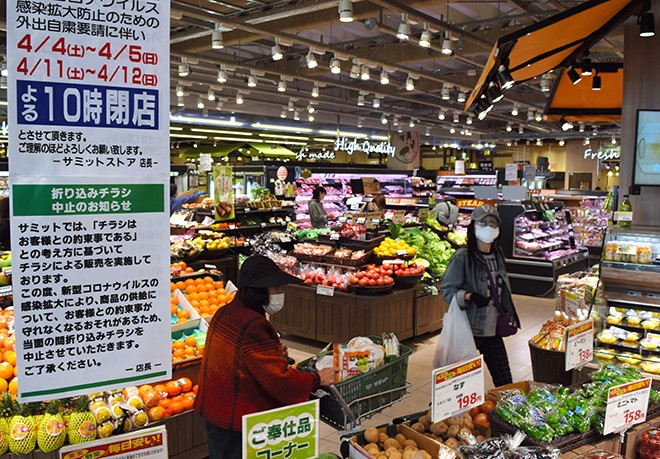 Customers stock up on food at a supermarket in Tokyo’s Suginami Ward in April 2020 amid the spread of the novel coronavirus. (Asahi Shimbun file photo)

The prices of many food products, ranging from potato chips to beef bowls, are increasing as producers try to deal with the rising costs of ingredients and crude oil.

The recent decline in the yen’s value has also hurt the bottom lines of the companies.

Ajinomoto Frozen Foods Co. will raise the prices of 18 items, including hamburger patties and vegetables, from February.

The price increases will range from about 4 to 13 percent in real terms since the company will keep the cost of some products unchanged by reducing their contents.

The company said the prices of imported beef and fats and oils are soaring amid growing demand in China.

It added that higher crude oil prices have pushed up the costs for logistics, factory operations and packaging.

Ajinomoto Frozen Foods will also increase the prices of 346 food products, such as “gyoza” dumplings, used in side dishes offered at bars, restaurants and supermarkets by around 3 to 8 percent.

Nisshin Foods Inc. will raise the price of soft wheat flour because of higher import costs.

The price of a 1-kilogram package of soft wheat flour is expected to jump by 16 yen (14 cents) to 290 yen, excluding tax, from January.

Yamazaki Baking Co. will also raise shipment prices of some breads and buns by 7.3 percent on average.

Expecting a poor potato harvest, Calbee Inc. will increase the prices of 17 potato chip products, including a 60-gram Potato Chips Lightly Salted package, by about 7 to 10 percent from January. It will also reduce the contents of Jagarico potato chip sticks and other items.

Nestle Japan Ltd. will raise the suggested retail prices of 56 coffee products by around 10 to 20 percent amid rising coffee bean prices.

The recommended retail price of an 80-gram Nescafe Gold Blend package, for example, will be up by 176 yen to 1,207 yen, including tax, from January.

Yoshinoya, operator of a leading Japanese beef bowl chain, raised the price of an M-size beef bowl for the first time in about seven years.

The price rose by 39 yen to 426 yen, including tax, starting on Oct. 29, but takeout orders are excluded from the increase.