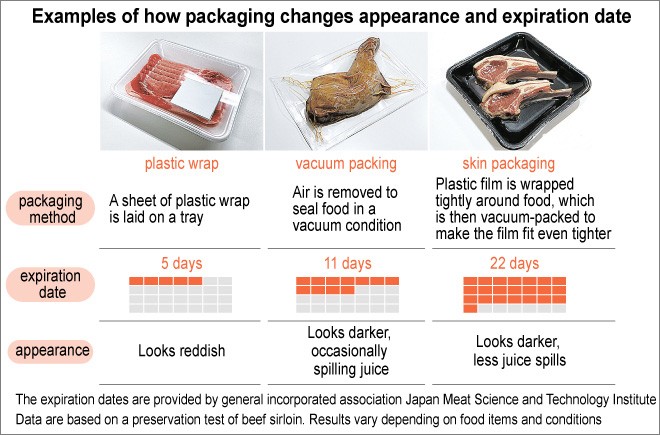 One day in late October, fresh beef for steaks and other cuts on black trays were seen lined up in one corner of the meat department at the Funabori outlet of the Aeon Food Style supermarket chain in Tokyo's Edogawa Ward.

What caught the attention of shoppers was the packaging method that involves wrapping fresh meat and other food items tightly with a special plastic film.

According to the store's operator, Daiei Inc., this type of skin packaging can extend the expiration date by up to 10 days longer than regular plastic wraps.

"It's convenient when I can keep it for a long time because I can't go shopping too often after I go back to work," said a 32-year-old woman on maternity leave.

Backed by a growing awareness of the U.N. Sustainable Development Goals (SDGs), skin packaging is becoming increasingly popular among supermarkets and other retailers to extend expiration dates and reduce food loss.

But it remains a challenge whether product appearance can appeal to consumers because skin-packed items look darker than when they are wrapped in regular plastic wrap, experts say.

According to Tokyo Foods Machinery Co., which imports and sells wrapping machines, films strong enough to tightly wrap even shrimp and meat with bone are used for skin packaging.

Compared to vacuum packaging, skin packaging prevents red drips from piling up inside the package, while the film is less prone to ripping because of its firm fit.

It is attracting increasing attention in the supermarket industry as it helps reduce food loss.

Daiei introduced skin packaging in 2019, currently using the method at about 190 supermarkets in the Kanto and Kinki regions.

"The disposal rate for beef was reduced by 30 percent, coupled with other measures to cut food loss," said a representative from the livestock division.

The packaging technique is mainly used for blocks of meat because it is more suitable than for sliced meat for household consumption and other products as meat blocks tend to stay longer on the shelves before they are purchased.

Major meat processor Starzen Co. has been using skin packaging with a barrier film since 2020 mainly for products with a high unit price such as Japanese "wagyu" beef for "yakiniku" grilled meat and steaks.

Their expiration dates are extended by about one week compared to regular plastic wraps, the company said.

There was a more than fivefold increase in the number of companies handling skin-packed items compared to the summer of 2020.

"(The rise) has been influenced by an increased awareness of food loss and other issues among consumers and clients," a representative said.

According to the agriculture ministry, about 6 million tons of edible food are discarded each year in Japan. Supermarkets, convenience stores and other members of the retail sector discard 660,000 tons, making up 11 percent of the total food loss.

APPEARANCE KEY TO WIDESPREAD USE

The key for the industry to further spread the use of skin packaging is appearance.

It is said that beef wrapped in plastic wrap looks bright red on many occasions, while skin-packed meat looks darker in color.

"I can't help but reach for meat with a bright red color," said a 71-year-old housewife who was examining packages of beef at a supermarket in Tokyo.

According to Tokyo Foods Machinery, beef is prone to turn red when exposed to air.

"Vacuum skin packaging helps food retain freshness, while it often makes the food look darker in color," said Tokyo Foods Machinery Chairman Tetsushi Hata. "As is the case with tuna, the Japanese people share a deep-rooted belief that 'the redder it looks, the fresher it should be.'"

Yuji Wada, a professor of food science and technology at Ritsumeikan University's College of Gastronomy Management, added: "People psychologically feel that the more vibrant the color (of food) is, the better it tastes."

The fact that the skin packaging process wraps meat firmly with a film, making its texture less visible, also goes against consumer sentiment, he said.

Wada hopes consumers will be more knowledgeable when shopping and also emphasizes the need for retailers to make efforts to promote skin packaging.

"They should devise ways for tray colors, lighting in the sales section and displays to give consumers easy access (to skin-packed products)," the professor added.

(This article was written by Takashi Ogawa and Shuhei Shibata.)