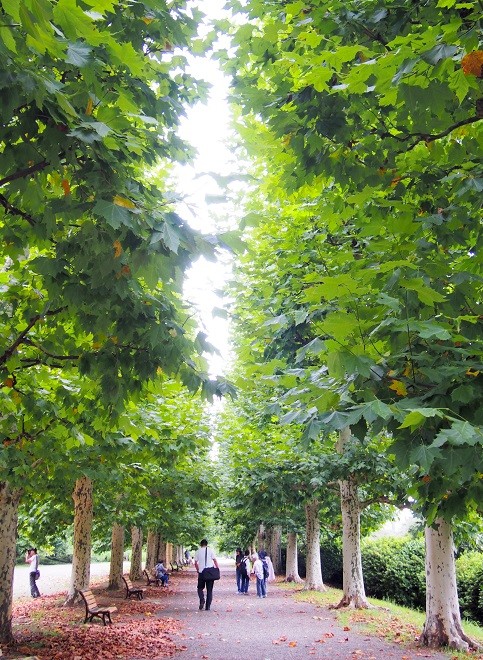 Standing under the lush verdant leaves of plane trees brings relief even from summer’s brutal heat.

Among the many trees that line the streets, I have always been particularly partial to plane trees. But I understand their numbers have been falling rapidly in recent years.

In Tokyo, for instance, there were about 50,000 plane trees 35 years ago, but only about half of them are left today.

They were once the third most numerous nationwide, after ginkgo and flowering cherry trees. But somehow, they have since dropped to No. 12. Why this dramatic decline?

“They shed leaves profusely in autumn, and ‘rain’ caterpillars on the streets, too,” explained Seiya Ebisawa, 64. “Naturally, many people complain.”

With frequent extreme weather episodes such as heat waves and floods today, the world’s advanced nations are making the most use of roadside trees to deal with climate change, according to Ebisawa.

“Because plane trees are especially tolerant to heat, those nations are planting more of them, letting them extend their branches to create more shade,” he noted.

But in Japan, aggressive pruning to reduce the volume of fallen leaves has become a widespread practice, reducing tree-shaded areas as a result.

Walking around in search of streets lined with plane trees, I saw, in a busy entertainment district near JR Shibuya Station, rows of young trees mercilessly shorn of practically every branch. It was a painful sight to behold.

Just as pathetic was a scene in the Kasumigaseki district, the seat of Japanese bureaucracy, where the starkly bare trees could have been mistaken for power transmission poles.

In contrast, flowering dogwood trees have been growing in popularity across the nation in recent years. Their white or pale pink blossoms in spring are beautiful, and so are their yellow and russet leaves in autumn.

And most importantly, they generate few complaints from people.

This autumn, I learned that the rise and decline of roadside trees are strongly reflective of what humans find “convenient” or not.