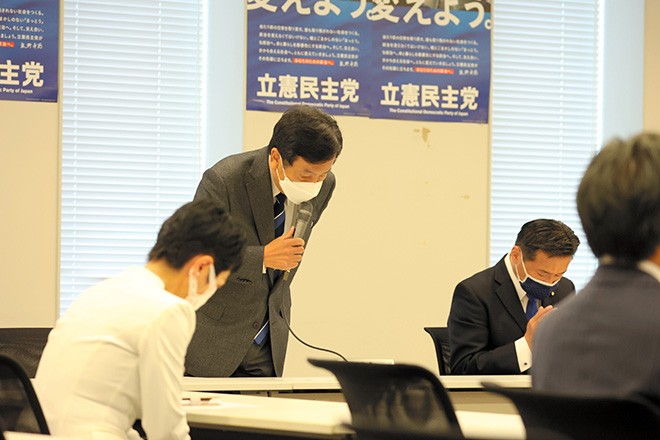 Yukio Edano apologizes at a Nov. 2 meeting of executives of the opposition Constitutional Democratic Party of Japan after announcing he was resigning as party head. (Koichi Ueda)

The new leader of the Constitutional Democratic Party of Japan will inherit a fresh issue that could escalate and threaten the very existence of the main opposition party.

The party’s leadership election will likely focus on whether the CDP should continue cooperating with other opposition parties in elections, particularly the Japanese Communist Party.

The CDP was created in 2017, but its roots go back two more years to the massive demonstrations against the national security legislation pushed by then Prime Minister Shinzo Abe in 2015.

A wide range of opposition lawmakers joined the protests, but members of citizens’ groups that organized the rallies also urged the opposition to cooperate in elections.

The groups had repeatedly seen how multiple candidates of opposition parties competing in single-seat districts played directly into the hands of the ruling coalition, which won large majorities in the 2012 and 2014 Lower House elections.

CDP leader Yukio Edano took up the baton for election cooperation. He worked to put up a united opposition front in 75 percent of the single-seat districts in the Oct. 31 Lower House election.

But with the CDP winning only 96 seats, 13 fewer than it had before the election, Edano took responsibility and announced on Nov. 2 that he was stepping down.

The one element that gained the largest criticism, even from among traditional supporters of the CDP, was the cooperation agreement reached with the JCP.

Rengo (Japanese Trade Union Confederation) has long worked in opposition to the JCP.

To avoid offending that traditional support base, Edano had to carefully frame the cooperation agreement by noting that the JCP would not have any Cabinet ministers should the opposition take control of the government.

He also stressed that the JCP would have no say in the compiling of budgets or other legislation before they are submitted to the Diet under an opposition-led government.

Still, Tomoko Yoshino, who became the first female chair of Rengo in October, criticized the arrangement with the JCP and suggested that limits be placed on cooperation in the election.

Others within Rengo were more favorable to the stance taken by the Democratic Party for the People.

The DPP was a partner in the opposition election cooperation but it created more distance between itself and the JCP.

The opposition cooperation issue will be raised in the election to choose Edano’s successor as CDP leader.

Concerns have already risen that disagreements over the CDP’s future course could escalate, leading to repetition of the past splits in the opposition bloc.

The then Democratic Party of Japan fractured in 2012 over differences related to the consumption tax and resumption of operations at nuclear power plants.

Such a confrontation could cause the CDP to “fall into a deep pitfall,” according to a senior member of the Civil Alliance for Peace and Constitutionalism.

That group worked for the policy agreement among four opposition parties to prepare for the Oct. 31 Lower House election.