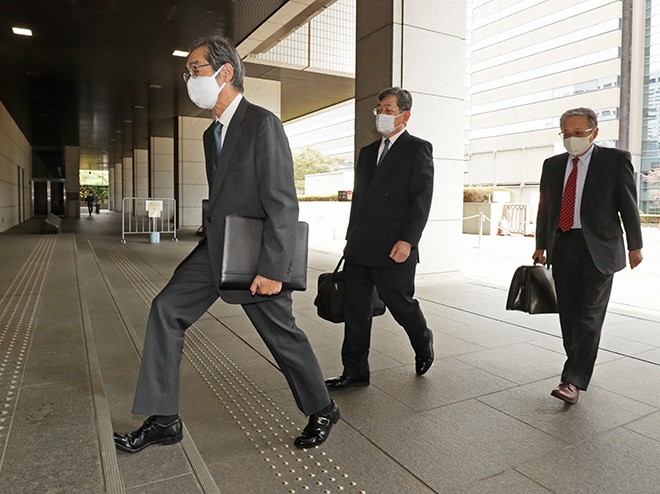 Ichiro Takekuro, a former vice president of Tokyo Electric Power Co., enters the Tokyo High Court on Nov. 2 for the start of the appeal of his not guilty district court ruling. (Pool)

Three former Tokyo Electric Power Co. executives again maintained their innocence as proceedings began Nov. 2 at the Tokyo High Court on an appeal of a lower court ruling that absolved the three of negligence in the 2011 Fukushima nuclear disaster.

They were charged with professional negligence resulting in the deaths of 44 people who were forced to evacuate and the injuries of others after the triple meltdown at the Fukushima No. 1 nuclear power plant in 2011.

However, the Tokyo District Court in 2019 found the three not guilty on grounds they could not have predicted that a gigantic tsunami would inundate the plant and cut off all electricity to cool the reactors.

In their opening statement on Nov. 2 at the Tokyo High Court, the lawyers designated as the prosecutors in the appeals case argued that the district court ruling should be overturned because the executives could have foreseen a tsunami could swamp the plant based on the long-term earthquake forecast made by a government panel.

The two main issues in question in the case are whether the executives could have foreseen the tsunami and whether they took the necessary steps to prevent damage to the nuclear plant from a tsunami.

The Tokyo District Court cast doubt on the reliability of the long-term earthquake forecast and said the executives could not have foreseen that a situation would arise calling for the immediate stoppage of operations at the Fukushima plant.

The prosecutors at the high court said the district court made a major error by denying the forecast, which was the only official view of the central government, and based on scientific rationale.

They also said the district court should have considered if other measures, such as the building of a tide embankment, could have prevented damage to the plant.

Meanwhile, bereaved family members of the 44 who perished during the evacuation process said they only wanted justice.

“I don’t know how much longer I can go on living,” Mitsuko said. “I want to hear a verdict as soon as possible and see the former executives atone for their crimes.”

Kinji was an inpatient at Futaba Hospital when the triple meltdown occurred. The hospital was located about 4.5 kilometers from the Fukushima plant.

Mitsuko and a grandchild visited Kinji at the hospital on the morning of March 11, 2011. When she said she would come again, he nodded.

That was the last time she would see her husband alive.

Kinji was transported by a Self-Defense Forces bus on March 14, 2011, from Futaba Hospital, but the high radiation levels around the Fukushima plant meant a roundabout route had to be taken to evacuate. That meant it took more than 10 hours to reach Iwaki, Fukushima Prefecture.

Kinji also could not receive treatment, such as an IV drip, during the transport. He died at an Iwaki senior high school gymnasium on March 15, 2011.

“If measures against tsunami had been taken, my husband would still be alive today,” Mitsuko said. “Since a number of lives were taken, I was not convinced by (the district court) not guilty verdict. I want the court to recognize the responsibility of the former executives.”

(This article was written by Eri Niiya and Keiji Iijima.)