Tourism industry calls for quick return to Go To Travel 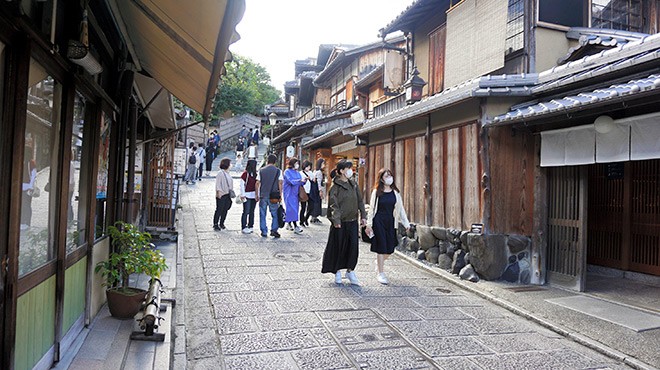 Only a few tourists walk the streets near Kyoto's Kiyomizu dera temple on a recent Sunday. (Shinya Takagi)

Tourism industry officials are clamoring for a resumption of the discount-laden Go To Travel campaign to revitalize pandemic-hit businesses, but economic experts say the program’s funds might be better spent elsewhere.

One executive of a major travel agency said the tourism industry cannot be resuscitated without the Go To Travel campaign.

About 2.7 trillion yen ($23.6 billion) was set aside for the tourism-promotion program, a pet project of then Prime Minister Yoshihide Suga that started in July 2020.

It covered as much as half of travel expenses up to 20,000 yen as a subsidy to support the tourism industry that had been hurt by the spread of novel coronavirus infections.

However, a surge in new COVID-19 cases led to suspension of the campaign in late 2020, leaving about 1.3 trillion yen unused.

More than a month has passed since the government lifted the COVID-19 state of emergency, but the number of tourists has yet to return to pre-pandemic levels.

Tourists from abroad are still banned from entering Japan as a precaution against the novel coronavirus.

Hiroyuki Takahashi, chairman of travel agency JTB Corp., said Japanese customers are waiting for the Go To Travel campaign to resume before making their reservations.

In the ancient capital of Kyoto, autumn is normally a busy tourist season, but officials of the city tourism association said only 27 percent of rooms were occupied at major hotels in September, about 33 percent of the level in September 2019.

Officials of the Japan Travel and Tourism Association met with Tetsuo Saito, the tourism minister, on Oct. 15 and asked that the campaign be resumed as soon as possible.

Saito said the campaign would be a catalyst for rebuilding the economy.

The Suga government came under criticism for extending the Go To Travel campaign over the entire nation when infections were spreading.

Despite the risk, use of the program skyrocketed, and 90 million people took advantage of the campaign.

However, the tourism ministry is now concerned about another spike in COVID-19 cases stemming in part from increased travel.

The government is considering various measures to prevent such a spread, such as using certificates that show individuals have been vaccinated or tested negative for the coronavirus.

But not everyone is as enthusiastic about resuming the campaign.

Kazuki Kitatsuji, a specialist in domestic macroeconomics at the Japan Research Institute, pointed out that despite the subsidies distributed last year, the rate of increase in spending on travel and eating out was not very different from other consumption items.

A resumption of the campaign would have only limited effects on the economy, he said.

“If new infections decrease and consumers think again about travel, people will return to tourist spots even if public funds are not distributed,” Kitatsuji said.

Takahide Kiuchi, executive economist at Nomura Research Institute, said that other business sectors were also in need of government support.

“As the fiscal condition worsens, there will be a need to consider if the (Go To) policy has high priority,” Kiuchi said.

Others called for a different approach to support the tourism industry.

“Rather than an excessive initial boost, what is needed is to sustain the industry over the long term,” Yoshiharu Hoshino, CEO of Hoshino Resorts, said.

He suggested reducing the size of the subsidy but extending the period of the campaign.

(This article was written by Shinya Takagi and Sho Hatsumi.)