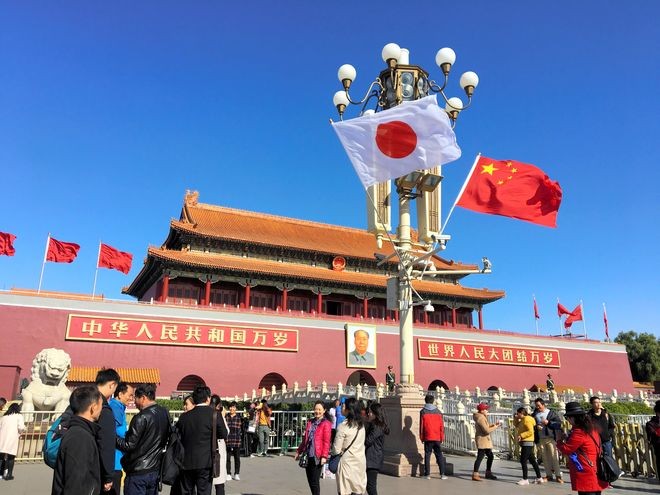 Japanese and Chinese national flags are hoisted in front of the Tiananmen gate in Beijing in October 2018 when then Prime Minister Shinzo Abe and Chinese President Xi Jinping held a summit in the city. (Asahi Shimbun file photo)

The relationship between Japan and China, which is often described as “ichii taisui,” or neighbors across a narrow strip of water, always needs to be considered from a multifaceted, multi-layered perspective.

Building trust between the Japanese and Chinese people is crucial for the two countries to expand areas of mutual benefits despite bitter disagreements on some bilateral issues.

Japanese and Chinese political leaders have the grave responsibility to ensure balanced, level-headed attitudes in the people of the two nations toward their bilateral relationship.

Chinese people’s sentiment toward Japan has taken a significant downturn recently, according to an annual poll conducted in both Japan and China by the Japanese nonprofit think tank Genron NPO.

In this year’s survey, carried out in August and September, 66 percent of the Chinese respondents said they have an “unfavorable” or “somewhat unfavorable” impression of Japan, up some 13 percentage points from the previous survey in 2020.

The decline came after nearly a decade of steady improvement in the Chinese people’s feelings toward Japan since 2012, when the Japanese government moved to nationalize the disputed Senkaku Islands in the East China Sea.

The Chinese public’s perceptions of Japan changed for the worse for the first time in eight years, according to the Genron NPO.

Reasons cited for the negative turn include history-related issues, the bilateral territorial dispute over the Senkaku Islands and Tokyo’s pro-American stance toward the confrontation between the United States and China.

The Chinese government and media have criticized Japan for its decision to release treated radioactive water from the crippled Fukushima No. 1 nuclear power plant into the sea and its move to expand its relations with Taiwan. Some observers say these issues have negatively affected how the Chinese people view Japan.

The number of Chinese tourists visiting Japan, who are said to have contributed to improving Chinese sentiment toward Japan, has plummeted to about one-ninth from the levels before the COVID-19 pandemic.

Nearly 10 million Chinese visitors to Japan annually sent out diverse information about Japan through social media. But this massive current of information has dried up, giving messages from the Chinese government a relatively stronger impact on Chinese public opinion, according to some experts.

The Chinese people’s negative perceptions of Japan amid rising tensions between the two countries over such sensitive security issues as the Senkaku dispute are deeply worrisome because they could influence Chinese leaders’ decisions when an unexpected security crisis arises.

This development has come against the backdrop of rising hard-line sentiment toward other countries in China as a result of the increasingly bitter rivalry between Washington and Beijing. China’s Communist Party government should refrain from dangerous words and deeds designed to fan nationalist sentiment.

The survey also found that Japanese sentiment toward China has remained overwhelmingly negative. The ratio of Japanese respondents who described their feelings toward China as “unfavorable” or “somewhat unfavorable” rose slightly from the previous year to reach 90 percent.

This is hardly surprising given China’s aggressive military buildup and naval expansion. The figure is still extraordinary and anti-China sentiment has also grown in many Western nations as well. The Chinese leaders should ponder the reasons for their country’s unpopularity.

The year 2022 will mark the 50th anniversary of the normalization of diplomatic relations between Japan and China. In their telephone talks in October, Prime Minister Fumio Kishida and Chinese President Xi Jinping referred to the fact.

The two leaders should try to expand their communication opportunities and send more messages to their own countries' people to stop the cycle of mutual distrust.

The Japanese and Chinese people’s feelings each toward the other country are sensitive and fragile because of the wartime past. On other hand, relations between the two countries have overcome many challenges through multi-layered exchanges.

The need to find ways to ensure coexistence and co-prosperity in this challenging situation will test the two countries’ diplomatic prowess and ingenuity.