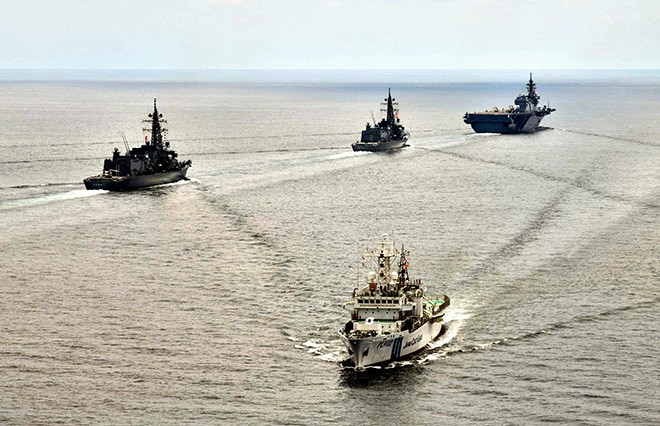 The Japan Coast Guard’s Tsugaru patrol boat and three vessels from the Maritime Self-Defense Force, including the helicopter carrier Izumo on the right in the background, in a joint exercise in waters in the South China Sea on June 26. (Provided by the Japan Coast Guard)

WASHINGTON--U.S. Republican lawmakers introduced legislation on Thursday seeking to provide $2 billion per year and other assistance to bolster’s Taiwan’s defenses as it faces rising pressure from China.

The legislation, reviewed by Reuters, would authorize $2 billion a year in Foreign Military Financing--U.S. grants and loans that enable countries to purchase weapons and defense equipment produced in the United States--through 2032 for the self-ruled island.

While the bill is sponsored only by Republicans, the minority party in the Senate, it adds to pressure from Congress on Democratic President Joe Biden for bolder action to strengthen ties with diplomatically isolated Taiwan.

The United States is the main military supplier for the democratic island nation.

It was not immediately clear how Democrats view the bill. Support for Taiwan is a rare issue that garners bipartisan backing in the deeply divided Senate.

The funding would come with conditions, including Taiwan committing to match U.S. spending, and whether Taipei and Washington agree to conduct joint long-range planning for capacity development.

The United States has urged Taiwan to pursue defense reforms to focus on capabilities to make its military forces more mobile and harder to attack, as well as to ensure it maintains a strong reserve force.

The “Taiwan Deterrence Act” also would amend the existing Arms Export Control Act, which governs foreign military sales, to make it easier for U.S. firms to sell arms to Taiwan. It also would require an annual assessment of Taiwan’s efforts to advance defense strategy toward China.

The bill also would improve military exchanges with Taiwan and expand professional military education and technical training opportunities in the United States for Taiwanese military personnel.

“The defense of Taiwan is critical to retaining the credibility of the United States as a defender of the democratic values and free-market principles embodied by the people and government of Taiwan,” the bill’s text says.

China recently has ramped up military pressure, including repeated missions by Chinese warplanes near democratic Taiwan, which Beijing claims as its own and has not ruled out taking by force.

Biden has confirmed a “rock-solid” commitment to Taiwan and criticized China. Beijing blames Washington’s policies of supporting Taiwan with arms sales and sending warships through the Taiwan Strait for raising tensions.

On Wednesday, the U.S. Department of Defense in its annual report to Congress on China’s military reiterated concern about increasing pressure on Taiwan.

The report renewed concerns about China’s development of options to take Taiwan, although a defense official declined to speculate to reporters about whether that scenario was likely or say if the department sees a near- or even medium-term risk of armed conflict.