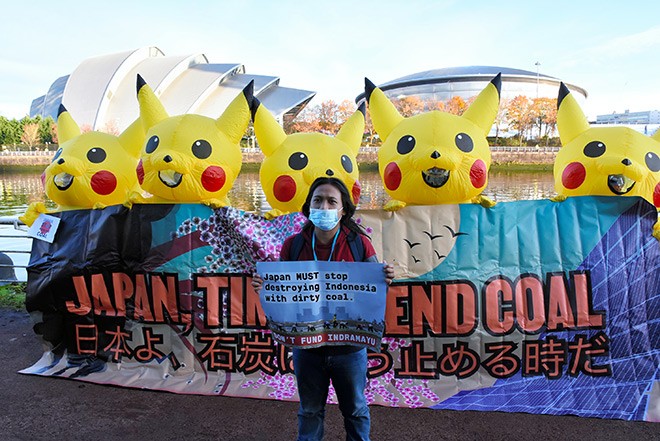 Protesters dressed as the Pikachu anime character gather outside of a venue at the U.N. Climate Change Conference in Glasgow on Nov. 4 to urge the Japanese government to stop providing support for exports of thermal power plants. (Keisuke Katori)

Japan fell further behind in global efforts to move away from coal-fired thermal plants after declining to sign an agreement at the U.N. Climate Change Conference (COP26) in Glasgow.

About 40 nations on Nov. 4 signed the “Global Coal to Clean Power Transition Statement,” which calls for advanced economies to end the use of coal-fired plants by the 2030s and the rest of the world to do so by the 2040s.

“Coal power generation is the single biggest cause of global temperature increases,” the statement said, adding that there was an urgent need to “scale-up the deployment of clean power to accelerate the energy transition.”

Japan, the United States and China did not sign the statement, which also calls for the suspension of construction of new thermal plants that lack measures to decrease greenhouse gas emissions as well as the end of government support for exporting thermal plants.

Alok Sharma, the British COP minister who serves as president of COP26, said at a related event on Nov. 4, “The end of coal power is now within sight.”

But not in Japan.

Japan has always lagged behind other nations when it comes to thermal-fired power plants.

The other nations in the Group of Seven have all announced clear deadlines for ending the use of such plants, with even the United States saying it planned to do so by 2035.

Japan, however, not only has declined to set a clear goal, but its basic energy plan approved by the Cabinet of Prime Minister Fumio Kishida on Oct. 22 also calls for coal-fired plants to contribute 19 percent of the total energy needs of the nation in fiscal 2030.

One high-ranking economy ministry official said there would be no compromising on that figure because dependence on such plants was necessary to ensure a stable supply of electricity.

The Japanese government has come up with what it describes as a cleaner way to burn coal. It says that mixing ammonia and hydrogen into the fuel would result in zero carbon dioxide emissions.

But an international environmental group panned that idea as a “deluded dream” that was still far from technologically feasible and costly as well.

For one thing, Japan would have to create a new chain for a stable supply of ammonia from abroad.

Converting just one thermal plant with an output of 1 million kilowatts into one that can burn a 20-percent mixture of ammonia would require 500,000 tons of ammonia annually.

That volume is half of the current annual consumption of ammonia in Japan for industrial purposes.