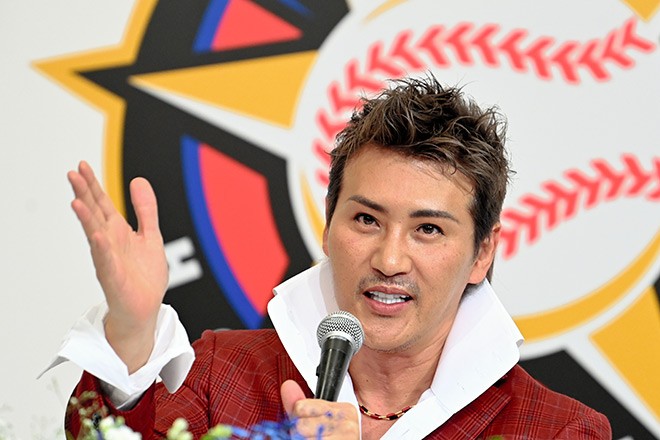 Tsuyoshi Shinjo, the new manager of the Hokkaido Nippon-Ham Fighters, at a news conference on Nov. 4 in Sapporo (Kengo Hiyoshi)

SAPPORO—The new skipper of the Hokkaido Nippon-Ham Fighters has issued his first order.

“Don’t address me as ‘manager,’” Tsuyoshi Shinjo said at a news conference held in a hotel in Sapporo on Nov. 4. “Please call me ‘Big Boss.’”

It may have been an unusual request in Japan’s baseball world, but Shinjo has never been an ordinary figure in the sport.

At the presser, he gave an indication of how he plans to manage the flagging Pacific League team.

The ever-flamboyant Shinjo, 49, walked onto the stage in a reddish-brown suit with the big collar of a white shirt turned up high.

He then struck a pose for photographers by putting his right hand on his waist.

He also handed out business cards to reporters, bearing his name as “BIGBOSS SHINJO” with the team’s slogan, “Hokkaido Pride.”

Shinjo has signed a one-year managerial contract with the team for an estimated 100 million yen ($880,000).

At the start of the presser, Shinjo said, “I have signed as a player-manager.”

That comment drew an immediate reaction from Koji Kawamura, the team’s president, who was sitting next to Shinjo.

“No, no. Only as manager,” Kawamura said, drawing laughter from everybody in the room, including Shinjo.

The former outfielder’s multiple skills won him widespread popularity in Nippon Professional Baseball (NPB) and earned him roster spots on the San Francisco Giants and the New York Mets of the major leagues.

He left the majors and signed with the Fighters in 2004.

Although he retired as a pro player in 2006, he expressed a desire for a comeback and took part in an NPB tryout in December 2020.

However, Shinjo did not receive a contract offer from any of the 12 teams.

At the news conference, Shinjo revealed he had a different intention when he joined the tryout.

“My ultimate goal was here,” he said, referring to a manager’s post. “I thought it would be best if I gained attention from everybody and became a manager of a baseball team the following year, then the fans would come to (my team).”

Just as he envisioned, the Fighters made an offer on Oct. 12.

Yoshihide Hata, the team’s owner, said Shinjo is “the best qualified person” for the post.

The Fighters’ new home stadium is under construction in Kita-Hiroshima on the outskirts of Sapporo and is expected to open in 2023.

“He knows the history of the team in Hokkaido, and he was a key player when the team became the national champion (in 2006),” Hata said.

Despite saying his goal was to become a baseball manager, Shinjo said the “homecoming” offer was a big surprise.

“First I thought, ‘Me? For real?’ Then again, I thought, ‘It’s gotta be me and nobody else,” Shinjo said.

Asked by a reporter how long it took for him to say yes, Shinjo said: “One second! I said, ‘Yes, please. I will. I will do it.’ Of course.”

The new manager’s jersey number will be “1,” the same he wore as a player.

“I’m back with an intention to change the Fighters, and to change professional baseball,” he said.

The friendly jibe between Kawamura and Shinjo continued.

The team president said he expects the new skipper to “build a team that can always contend for a championship.”

But Shinjo then declared something unheard of from a manager in any sport. “I absolutely decline to aim at a championship.”

“For players, setting a goal too high doesn’t work well,” he said.

He said he will instead encourage players to work steadily in practice every day and prepare for the new season.

“Then, if we are a contender around September, I would say, ‘OK, let’s do it.’ I would love to build a team like that,” he said.

Earlier in the day before the news conference, Shinjo visited the construction site of the new stadium.

“I got goose bumps,” he said. “I’m jealous of players who can play here. I’ve seen many stadiums in the United States, but this stadium will cause a buzz around the world.”

The Fighters have struggled recently and finished in the lower rungs of the PL standings in four of the last five seasons.

Shinjo said the absence of fans from the Fighters’ games because of the COVID-19 pandemic had given him a dark impression.

But things will change, he pledged, because of him.

“Now that I’m back, the stadium will be packed. Because it’s meant to be,” Shinjo said. “I would love to put more smiles on our fans’ faces.”

Shinjo’s off-field antics, including his flashy fashion sense, self-praise for his physical appearance and stream of unreserved comments, have often brought about laughter, or even shock, among even people who do not follow baseball.

The arrival of the unconventional manager has already raised expectations among fans in Hokkaido.

“I did not expect him to become the manager,” said Junko Yabuki, 65, who runs an izakaya-style pub with her husband in Sapporo’s Chuo Ward, where Fighters’ fans often gather. “It is like a dream.”

“You can’t take your eyes off of him because you never know what will happen next. He was a superstar who plays like that,” she recalled.

“I’m OK if the team doesn’t aim to become a champion right away. I want him to help develop the qualities of the players and play a baseball that fans can enjoy watching even in defeat,” she said.

Yuji Hasegawa, 52, who heads a private pep squad for the Fighters, organized a petition movement urging the team to sign Shinjo after it was reported that he wanted to return to Japan from the major leagues.

He collected 3,165 signatures and submitted them to the team.

At a news conference announcing the team’s signing of Shinjo, the new Fighter said that he had received the signatures.

Shinjo never disappointed Hasegawa and other fans with his performances on and off the field, known as “Shinjo Theater.”

The Fighters’ home stadium “holds the history of Shinjo,” Hasegawa said. “I expect him to show us a baseball that goes back to the original purpose and puts top priority on entertaining fans.”