EDITORIAL: So much money wasted on ill-conceived anti-virus steps 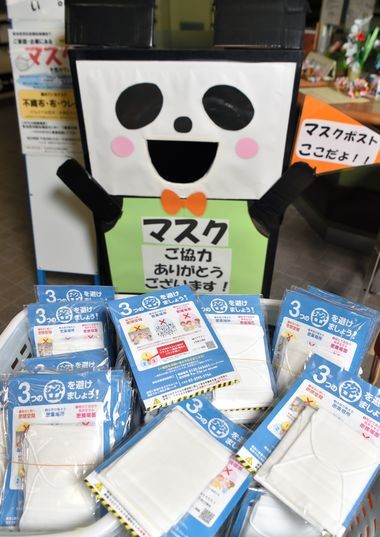 Unused face masks, dubbed “Abenomasks,” are returned by households from across the nation to the social welfare council in Tajimi, Gifu Prefecture, in June 2020. (Asahi Shimbun file photo)

The government squandered loads of taxpayer money in its programs to deal with the COVID-19 pandemic due to its decision to outsource tasks to private-sector businesses, according to the Board of Audit.

In its fiscal 2020 audit of government spending published Nov. 5, the board focused on the way pandemic-related policy measures were carried out, especially with regard to contracted policy programs and projects.

The government ought to heed the results of the audit and incorporate steps to fix the issues raised before it announces a new package of economic measures it plans to introduce in mid-November.

One of the pandemic topics that came under fire is the face mask distribution program during the early days of the crisis. Under the so-called “Abenomask” program, cloth masks were distributed to welfare facilities as well as all households in Japan.

Of the 290 million masks purchased by the government, 83 million, or nearly 30 percent, costing 11.5 billion yen ($101.4 million), were not delivered and remained in storage as of the March end of the fiscal year, according to the audit report. The government explained that these masks were not distributed because a nationwide mask shortage was alleviated earlier than expected.

The government can be forgiven for taking some missteps in responding to an outbreak of an unknown virus. Still the fact remains that a huge amount of public money was spent on products for which there was little demand. The program was promoted during the administration headed by Prime Minister Shinzo Abe. The government needs to scrutinize the process leading to the decision and identify the factors that caused delays in reviewing the program. It then must explain its findings to the public.

Storing the unused masks cost hundreds of millions of yen. Now that there is no shortage of masks, there is unlikely to be much demand for these unpopular masks. The government should consider disposing of them to stop this drain on finances.

There were also complaints about the quality of the masks, including cases where hair was found in packages or coverings were stained. The audit report said the health and education ministries did not require suppliers to comply with hygiene standards set by an industry organization, such as ensuring there is no serious change of color or foul smell, when they placed the orders.

There are other examples of poorly executed COVID-19 programs. The health ministry’s free COVID-19 contact-tracing app, called COCOA, was updated at the end of September without checking in advance if the updated version worked properly. After the update, the app stopped alerting some users even if they came into contact with others who had tested positive. Bugs in the system went unchecked long after a post on a website that identified the problem.

According to the audit report, the instructions for use did not specify what kind of tests were needed or how to respond to reports of problems by outside parties.

The Diet harshly criticized a lack of transparency in the way orders were placed and the exorbitant costs of outsourcing programs to provide financial aid to small businesses hit hard by the pandemic or subsidize travel expenses to support the battered tourism industry.

One notable common factor behind these problems is the government’s tendency to farm out policy projects to contractors without carefully examining them.

Due to a fiscal crunch, it was difficult for the government to assign a sufficient number of competent employees to make quick and effective responses to such emergencies. The government took a realistic step when it decided to outsource these programs and projects to private-sector businesses.

What is important is to establish a system to place orders swiftly according to the realities of front-line efforts to handle such situations. This requires having officials in place who can make active exchanges of information with businesses and work out details of programs on their own while taking steps to prevent collusion.

The nation still faces the risk of being hit by another wave of infections. To avoid making the same mistakes, the government should take steps to ensure it will place orders with businesses in an appropriate and responsible manner.