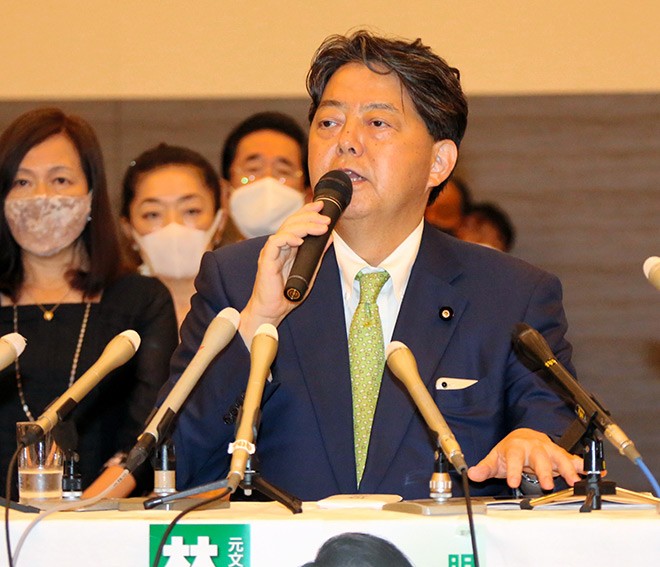 Yoshimasa Hayashi, a longtime member of the Upper House, announces his decision in July to run in the Lower House election in Ube, Yamaguchi Prefecture. (Asahi Shimbun file photo)

Prime Minister Fumio Kishida is set to appoint Yoshimasa Hayashi, a political veteran with broad experience as a Cabinet member, as his new foreign minister.

The appointment comes after Toshimitsu Motegi left the post to become secretary-general of the ruling Liberal Democratic Party. Kishida, who served as foreign minister in the Abe administration, will formally name Hayashi to the post when he announces his Cabinet lineup on Nov. 10, sources said.

Hayashi, 60, held the education, defense and farm ministry portfolios while he was in the Upper House, to which he has been elected five times in a row since 1995 from his constituency of Yamaguchi Prefecture.

Hayashi switched to the lower chamber when he ran in the Yamaguchi No. 3 electoral district in the Oct. 31 Lower House election.

Kishida is expected to retain the other members of the current Cabinet after he is formally elected as prime minister during a special Diet session that convenes Nov. 10.

Hayashi, the No. 2 figure in a faction headed by Kishida, unsuccessfully ran as president of the LDP in 2012.

After graduating from the University of Tokyo, he joined Mitsui & Co., one of the nation’s largest trading companies. He studied at Harvard University’s Kennedy School and worked on behalf of members of the U.S. Congress. After his return to Japan, he served as an aide to his father, Yoshiro Hayashi, a former finance minister.

Kishida appointed Motegi as LDP secretary-general because Akira Amari resigned from the party’s No. 2 post after only a month following his failure to win a seat in his single-seat constituency in the Lower House election.