Monument for Korean atomic bomb victims set up in Nagasaki 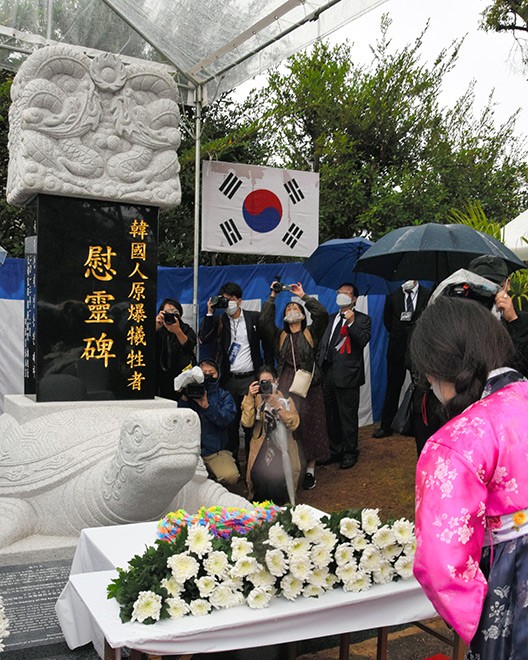 A monument dedicated to ethnic Koreans who perished in the 1945 atomic bombing of Nagasaki is unveiled in the Nagasaki Peace Park in Nagasaki on Nov. 6. (Ryo Sasaki)

NAGASAKI--A decades-long campaign by ethnic Koreans in Japan led to a monument being unveiled at the Nagasaki Peace Park here Nov. 6 to commemorate the thousands of their compatriots who perished in the 1945 atomic bombing of Nagasaki.

South Korean Ambassador Kang Chang-il and a representative of the pro-Seoul Korean Residents Union in Japan (Mindan) attended the unveiling ceremony with members of the Nagasaki city assembly and local high school students.

The structure was set up in front of the Nagasaki Atomic Bomb Museum.

After offering flowers to the monument, attendees observed a silent prayer for victims at 11:02 a.m., the time the bomb detonated over the city in southern Japan on Aug. 9, 1945.

At a memorial service held at the hall of the museum, Kang said, “Today’s small step will go down in history as a model of joint efforts by South Korea and Japan and serve as a big step to contribute to founding the bastion of global peace.”

Nobuto Hirano, who has long championed providing state assistance to Korean victims of the atomic bombing now living in South Korea, likened the monument to a rearview mirror of a car.

“This looks back on history, but is necessary to move forward,” he said in his speech. “We want to advance South Korea-Japan relations by reflecting on the past.”

The 3-meter-high monument is made of stones from a quarry in South Korea. It was built with donations and funds from the South Korean government, according to a committee formed for the project, including Mindan officials.

The monument has inscriptions in Hangul, Japanese and English.

The Japanese inscription states that increasing numbers of Koreans were conscripted and mobilized against their will as laborers, soldiers or civilian workers for the military in the closing days of the Pacific War when the Korean Peninsula was under Japanese rule.

It notes that 70,000 or so people from the Korean Peninsula lived in Nagasaki Prefecture at the time, including those who had migrated to the prefecture during prewar years, and that several thousand to 10,000 of them died in the U.S. attack.

Mindan had lobbied the Nagasaki city government since the 1990s to build a monument dedicated to South Korean victims.

But little progress was made over the years, due largely to a construction project in the park.

The movement gained momentum about 10 years ago and meetings were held between city officials and proponents of the monument about the wording of the inscription and other details.

City authorities gave the green light to the construction of the monument this past summer.