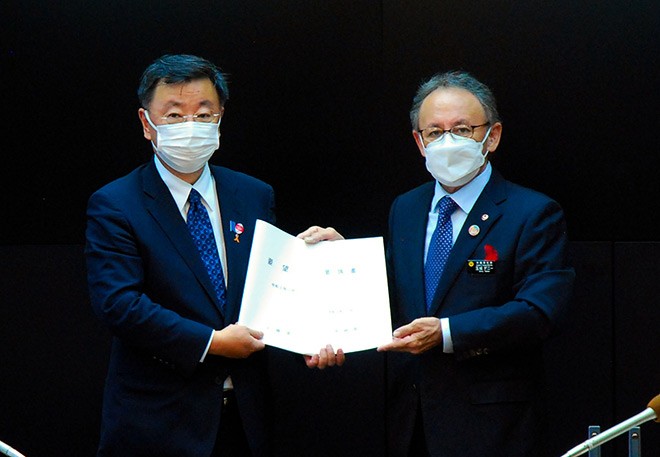 NAHA--Okinawa found its hopes dashed of a policy change in a contentious U.S. base project when the government’s most senior spokesman flew here from Tokyo on Nov. 6 to explain to Governor Denny Tamaki there would be no deviation under the new administration headed by Fumio Kishida.

The meeting between Chief Cabinet Secretary Hirokazu Matsuno and Tamaki came as Okinawa tries to deal with the ramifications of a local and vocal anti-base legislator losing his seat to a member of Kishida's Liberal Democratic Party in the Oct. 31 Lower House election.

Incumbent Tomohiro Yara of the main opposition Constitutional Democratic Party of Japan and a fierce critic of moves to relocate the base to the coastal Henoko district lost his seat to Aiko Shimajiri, a former minister in charge of Okinawa and Northern Territories affairs.

Adding salt to the wound is that the electoral district in question encompasses Nago, the general area where work is in progress for a facility to take over the functions of the U.S. Marine Corps Air Station Futenma in Ginowan, also in the prefecture.

The defeat allowed the LDP to win two of the prefecture’s four electoral districts, tying with the bloc supporting Tamaki and other members of a broad alliance opposed to the relocation of U.S. bases within the southernmost prefecture.

During the meeting held at the prefectural government building, Tamaki called for the early creation of a forum so central and prefectural authorities can exchange opinions on the relocation issue.

Polls, as well as a prefectural referendum, have consistently shown that the majority of islanders oppose the Futenma base relocation within the prefecture because Okinawa hosts about 70 percent of all U.S. military facilities in Japan.

In response, Matsuno said that pushing ahead with the relocation project will lead to the early return to Okinawa Prefecture of land now occupied by the Futenma airfield and the removal of danger posed by the base to Ginowan’s residents. The Futenma facility sits in the middle of densely populated residential area.

Matsuno also met with Nago Mayor Taketoyo Toguchi, who is backed by the LDP, and representatives of local residents’ association, vowing to forge ahead with the relocation project.

The new Kishida administration, however, is making an effort to demonstrate it is willing to listen to what Okinawans have to say, unlike the previous Suga administration, which maintained a consistent hardline policy and never gained a reputation for being courteous. This was amply demonstrated when Matsuno took the time to meet with Ginowan residents on Nov. 6.

They complained about the deafening roar of U.S. military aircraft and their fears of aircraft crashing, as has happened in the past. The residents also reiterated their demands for early closure of the Futenma facility.

Although the administration is taking softer approach to the Okinawa base issue, Kishida made clear in his policy speech last month where his priorities lie.

Still, Kishida will need to review how to move forward with the relocation project. Constructing landfill off Henoko is expected to become far more challenging than initially envisaged following the discovery of weak seabed in the planned area.

Hiroto Izumi, a special adviser to Suga who had hands-on management of the project for many years, no longer has a role to play with the change in prime minister. His departure adds to the difficulty of how to navigate a favorable outcome.

“Nobody can replace him,” said a senior official with the Defense Ministry, which is in charge of construction of the new base.

The Kishida administration’s strategy now is to gain further momentum by winning three pivotal elections next year: the Nago mayoral election in January, the Upper House election in summer and the Okinawa gubernatorial election  in the fall.

Of the three, winning the governor race would likely give the Kishida administration the big leap it craves.

“The relocation project will make a big progress in one go if a candidate (backed by the central government) wins,” said an official close to the prime minister’s office.