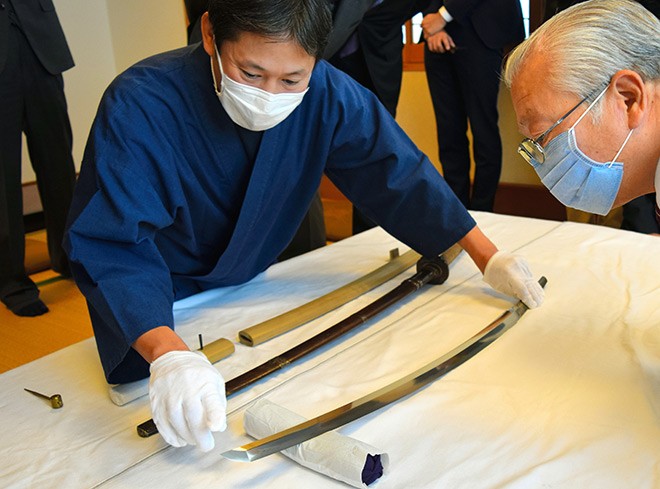 The mended sword was recently handed over to a representative of the Tokyo-based Nippon Foundation, which commissioned the local artisans for the refurbishment work.

“I felt like a weight was lifted off my shoulders as we handed the sword back,” said Tomonobu Yokoyama, 49, a sword sharpener involved in the project, on  Nov. 6. “I hope it will one day return to Myanmar when peace is restored there.”

Suu Kyi has been detained in Myanmar since she lost power in the military coup in February.

Measuring 69.1 centimeters, the blade is believed to have been forged by Sadatsugu Takahashi (1902-1968), the first swordsmith designated a living national treasure. His signature appears on the sword’s tang, the part that is inserted into the handle.

According to the Nippon Foundation and other sources, the weapon was presented to a lieutenant general of the Imperial Japanese Army overseeing Burma during World War II. Its ownership was likely transferred to Major General Aung San, Suu Kyi’s father, who led the nation’s independence movement.

The artifact arrived in the Bizen Osafune Token no Sato sword studio in Setouchi district in October that year.

Many craftspeople, including a sheath maker and creators of decorative and other metal fittings, worked on the weapon. Yokoyama said rust had penetrated so deeply into the blade that he needed to be careful not to wear down the sword while polishing it.

Yuji Mori, 68, a Nippon Foundation official who received the repaired sword in Setouchi, expressed his gratitude.

“I was deeply impressed that the blade pattern was reproduced so beautifully,” Mori said.

The blade will be kept by the foundation until it can be returned to its owner.