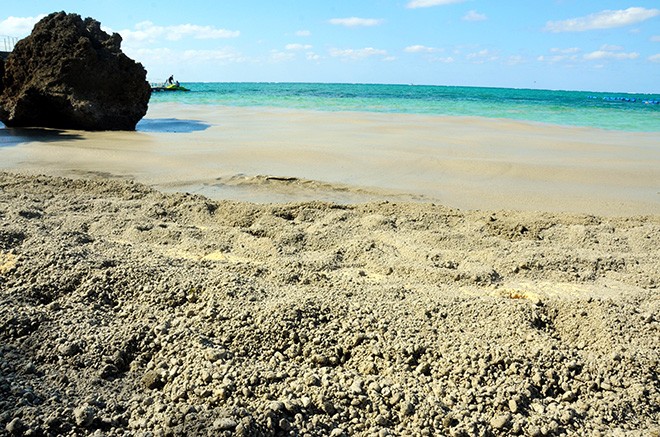 Pumice changes the color of the sea surface near a beach in Onna, Okinawa Prefecture, on Oct. 31. (Sho Hatsumi)

One old Japanese saying that describes the unexpected effects of an event is “Kaze ga fukeba okeya ga mokaru” (When the wind blows, the bucket-maker’s business thrives).

We are facing an example of such a situation right now. If only it were a boon to someone’s business. Unfortunately, nothing good is likely to emerge from this one.

“When an undersea volcano erupts, the tourist industry takes a massive hit.” The cause of the unexpected effect in this case is the huge rafts of “karuishi,” or pumice, that have drifted on the sea for hundreds of kilometers and reached the southwestern islands of Okinawa and Amami.

The white beaches and the blue sea of these islands now present shockingly ugly sights.

Video footage of the affected areas shows how coastlines are covered by gray carpets of pumice stones, making it impossible to tell where the sea ends and the beach starts.

The damage from the pumice that originated in a submarine volcano in the Ogasawara island chain is becoming increasingly more serious.

The fresh blow to the local tourist industry came just as it was gearing up for a rebound in tourist traffic due to the recent decline in the number of new COVID-19 cases.

The operations of fishing boats are being disrupted by the floating pumice, which could damage and disable ships. If this situation continues, it will spawn another parody of the proverb, “When an undersea volcano erupts, fish prices rise.”

It is urgent for the national government to support the efforts to remove these porous, froth-like volcanic glasses.

Enormous amounts of pumice also drifted to Okinawa's islands in 1924, according to “Karuishi--kaitei kazan kara no messeji” (Pumice--a message from a seabed volcano), a book written by petrology expert Yuzo Kato.

That caused ships traveling between islands to be stranded for three days. Banks of pumice covered the surface of the sea in wide areas stretching far out in the offing.

Many ship propellers were damaged. We are hearing similar episodes occurring this time as well.

Whether this is a “once-in-a-century” disaster or not, it is surprising that humble pumice could cause such a scale of damage.

Experts warn that pumice rafts could drift toward the main Japanese islands of Kyushu, Shikoku and Honshu. This prospect raises concerns that the pumice pebbles could affect the operations of nuclear power plants, which take in seawater to cool reactors.

“When a submarine volcano erupts, a nuclear power plant malfunctions.” Sufficient measures must be taken to ensure that this scenario never comes to pass.