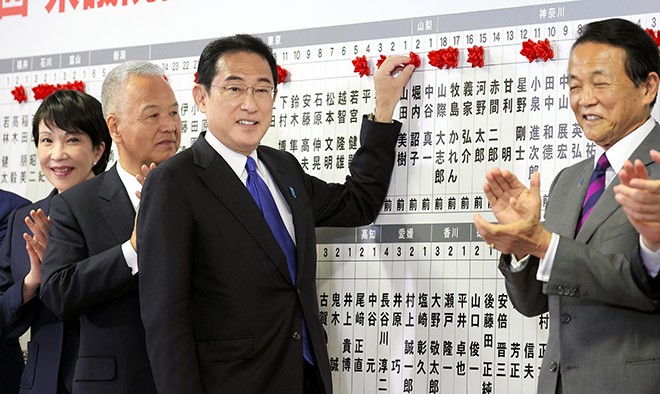 Prime Minister Fumio Kishida places a flower above the name of a winner in the Lower House election at the Liberal Democratic Party's headquarters in Tokyo on Oct. 31. (Shiro Nishihata)

Forty-seven percent of voters feel the Liberal Democratic Party’s comfortable majority won in the Lower House election was a “good” thing, while 34 percent believe it was “not good,” an Asahi Shimbun survey showed.

According to the national telephone survey conducted on Nov. 6 and 7, much of the positive sentiment for the ruling party stems from disappointment in the opposition parties.

Asked why the LDP won the majority in the Oct. 31 election, 19 percent of respondents cited a “high evaluation for the LDP and Komeito coalition,” far below the 65 percent who said, “There is no hope for the opposition parties.”

Sixty-nine percent of LDP supporters and 70 percent of backers of the main opposition Constitutional Democratic Party of Japan also said the LDP victory was because there was no hope for the opposition.

Osaka-based Nippon Ishin (Japan Innovation Party) made considerable gains in the election, and it is now the third-biggest party in the Lower House after the LDP and CDP.

Middle-aged groups showed more confidence in Nippon Ishin, with 53 percent of respondents in their 40s and 44 percent of those in their 50s saying the party generates “hope.”

The CDP, the Japanese Communist Party and three other opposition parties cooperated in the election by collectively fielding one candidate in as many single-seat districts as possible.

But only 27 percent of survey respondents said such a unified front “should continue” in the Upper House election to be held next summer while 51 percent said the cooperation “should end.”

Among supporters of the CDP, which had spearheaded the cooperation strategy, 47 percent said it “should continue.”

But among swing voters, only 21 percent said such opposition unity should be maintained.

The CDP and the JCP have different policies, including those for national security. Fifty-four percent of all respondents said the parties’ electoral cooperation was “problematic” while 31 percent replied that they did not think so.

Among CDP supporters, 58 percent said it was “problematic.”

Among JCP supporters, more respondents were OK with the alliance than those against the partnership.

Prime Minister Fumio Kishida’s economic policies elicited a sense of hope from 41 percent of respondents, matching the ratio for those who were pessimistic.

Forty percent of voters supported the Constitution being revised under the Kishida administration, while 36 percent were opposed to them, the survey showed.

In a January 2020 survey, 32 percent of respondents supported the constitutional revisions pushed by the Shinzo Abe administration, while 50 percent opposed them.

The approval rating of the Kishida Cabinet was 45 percent, a rise from 41 percent in the previous survey conducted on Oct. 19 and 20.

The disapproval rating was 27 percent, up slightly from 26 percent previously.

Support for the LDP improved from 34 percent to 36 percent in the latest survey, followed by the CDP at 9 percent, up from 7 percent. Nippon Ishin’s support rate tripled from 3 percent to 9 percent.

It received 490 valid responses, or 50 percent, from 975 fixed numbers of households with at least one eligible voter each.

There were 802 valid responses, or 41 percent, from 1,941 mobile phone numbers of eligible voters. Valid responses totaled 1,292.