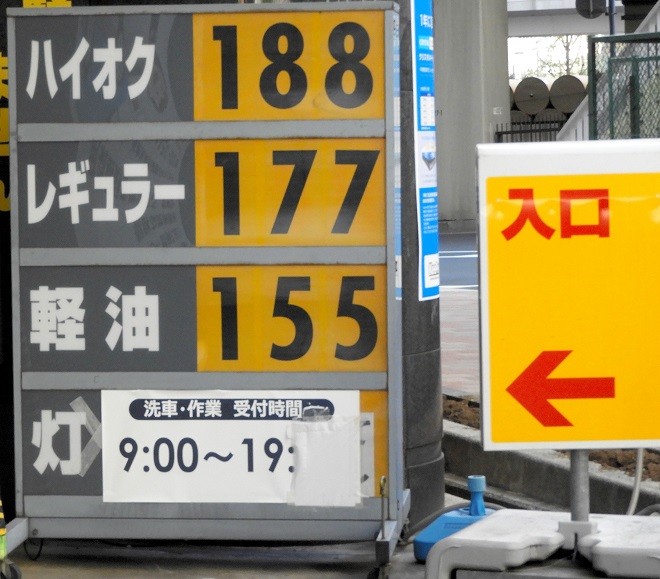 Oil prices are at their highest levels in about seven years and show no signs of starting to drop anytime soon.

In an online ministerial-level meeting held last week, officials from the Organization of the Petroleum Exporting Countries (OPEC), Russia and other non-OPEC oil-producing nations rejected calls for raising the pace of their increased output from next month. The decision dashed hopes for an early downturn in crude prices.

With demand for heating oil set to grow in the populous Northern Hemisphere this winter, some forecasters expect oil will remain a costly commodity at least until next spring. Costlier oil could splash cold water on global efforts to rebound from the impact of the COVID-19 pandemic.

In Japan, higher crude prices, combined with a weaker yen, have driven up gasoline prices. Last month, gasoline prices topped 160 yen ($1.41) per liter for the first time in three years. The rise in fuel prices is pushing up distribution and production costs across a wide range of industries and could precipitate a bout of “bad inflation,” or rising prices without growth in demand or wages. The government and Bank of Japan need to keep close watch on price trends.

The oil market has been roiled by the evolution of the health crisis. Last spring, oil futures prices fell below $20 per barrel as demand was depressed by the pandemic. The plunge in prices prodded OPEC members to make a concerted cut in their combined output by 9.7 million barrels per day, or 10 percent of global supply.

As the number of new COVID-19 cases began to fall globally earlier this year, oil prices bounced back and hovered around $60 in spring. The change in the pandemic crisis inspired OPEC to raise oil production by a modest 400,000 barrels a day each month, starting in August.

At this tempered pace of output expansion, however, supply has been unable to keep up with rebounding demand. Oil futures surpassed $80 for the first time in about seven years in October. Japan, the United States and other oil-importing countries urged OPEC to pump up output faster. But the bloc decided to stick with its previous plan to expand oil production by just 400,000 barrels a day. In the face of a possible major resurgence in COVID-19 cases, Kuwait, Iraq and some other OPEC members balked at faster output expansion.

It is indeed difficult to predict when and how a new wave of infections will strike. It is clear, however, that sharply higher oil prices will only add fuel to the movement to reduce oil consumption. Stability in prices and the supply-demand balance is also beneficial for oil-producing nations for the time being.

The biggest topic at the 26th session of the Conference of the Parties (COP26) to the U.N. Framework Convention on Climate Change in Glasgow is how to push the world toward a carbon-free future. Given the accelerating global trend away from the use of fossil fuels, it is hardly surprising that oil-producing countries are worried about the future.

Cooperation between oil producers and consumers is vital for ensuring a smooth shift to a society that is not dependent on fossil fuels without causing sharp fluctuations in oil prices.

One way to promote that shift is technological support from industrial nations, including Japan, to efforts by oil-producing nations to nurture cleaner energy industries like hydrogen as new revenue sources.

Higher oil prices should give impetus to long-term efforts at home to reduce the domestic carbon footprint. Policy support should be stepped up to promote battery electric and fuel-cell electric vehicles as higher gas prices lower their relative costs.

More should also be done to expand the use of renewable energy sources like solar and wind power.