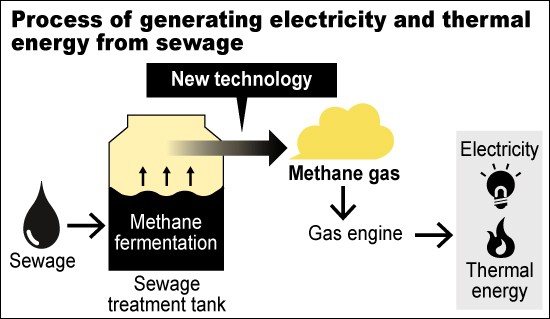 General contractor Taisei Corp. said it has developed a technology that can create “cleaner” sewage disposal plants by converting methane extracted from the waste into electricity and thermal energy.

The technology can help the facilities reduce greenhouse gas emissions and power consumption during the sewage disposal process, Taisei said.

Sewage disposal produces massive amounts of sludge at treatment plants in Japan. When the sludge is incinerated for disposal as industrial waste, it emits a large amount of carbon dioxide (CO2) and requires a substantial amount of power.

Sewage sludge is also used for biomass power generation, but only 4.5 percent of sewage treatment plants have adopted the method because it is not efficient enough.

The new technology uses a special film and minerals to efficiently extract methane from sewage.

In an experiment conducted by Taisei, the method cut power consumption by 30 percent while the water quality of the treated sewage remained at the same level as that under the existing procedure.

The company also said the technology generated more electricity from extracted methane than the amount used in the process, meaning the new method can effectively be used without consuming power.

Since the technology reduces the amount of sludge produced during sewage treatment, it helps to slash CO2 emissions during the sludge disposal process, the company said.

The method can also generate thermal energy by using a gas engine powered by methane.

Existing sewage treatment plants can also introduce the technology, according to Taisei.

The company expects the new method to be widely adopted at food processing factories in the private sector as well.