The Taka-yama float, which is being rebuilt in preparation for a full return to the Gion Festival next summer, is taken for a test-pull in Kyotanba, Kyoto Prefecture, on Nov. 6. (Video by Asahi Television Broadcasting Corp.) 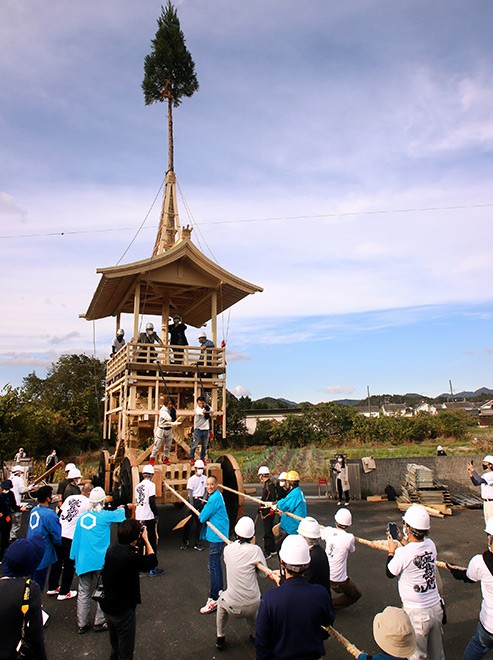 A test-pull for the Taka-yama float is conducted in Kyotanba, Kyoto Prefecture, on Nov. 6 in preparation for a full return to the Gion Festival next summer. (Toyokazu Kosugi)

KYOTANBA, Kyoto Prefecture—The nearly completed Taka-yama float was taken for a test-pull in preparation for its first appearance in the annual Gion Festival in about 200 years.

Maneuvering the float is the tricky part since it weighs several tons and has no steering wheel.

The Taka-yama float is being rebuilt by a contractor in Kyotanba for its return to the festival in summer 2022.

It will be part of the grand processions of “yamahoko” floats held as the highlight of the event.

Members of the Taka-yama preservation association based in Kyoto’s Nakagyo Ward moved the float assembled by the contractor for about 20 meters on Nov. 6.

Local residents joined the test by pulling the float with ropes to ensure its wheels rolled smoothly.

They also placed bamboo poles under the wheels to see if the float could be turned around.

Old records show that Taka-yama was part of the huge parade of elaborately decorated floats called Yamahoko Junko before the Onin War (1467-1477).

But the float was damaged by a rainstorm in 1826 and was excluded from the parade from the following year.

Junji Yamada, 67, head of the preservation association, said the biggest problem lies in the fact that its members are inexperienced in maneuvering the float, and special skills are required for its smooth operations.

The association initially intended to accumulate expertise by having members help with other floats during the festival.

However, the float parade was canceled last year and again this year because of the COVID-19 pandemic.

The group decided to get together once a month to receive training from members of other groups that regularly participate in the Yamahoko Junko parade.

“We want to do our best to practice as much as possible so that the float can make a full return to the parade,” Yamada said.