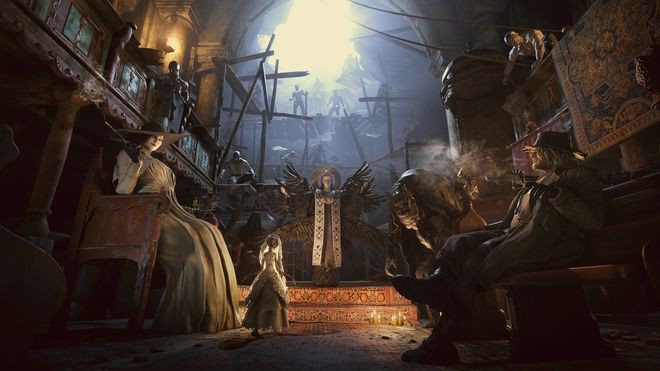 Capcom Co. game developer Jun Takeuchi thought he was being left for dead when he was pulled from the hugely successful “Street Fighter” game development team a quarter-century ago.

The Osaka-based company put him to work on a team developing a new video game featuring zombies in a horror setting.

“I thought that I was being removed from the mainstream,” he said.

Instead, Takeuchi and his team rose from the ashes to develop the global smash-hit "Biohazard," known in the West as "Resident Evil," now marking its 25th anniversary.

Global video game sales of the series have exceeded 100 million units over the past quarter-century.

The game software developers have had to overcome the challenge of keeping sequels of the game fresh with new looks and new features.

The game’s popularity has led to the resurrection of zombies menacing humans across all media.

BIRTH OF THE NEW ZOMBIE ERA

The original “Biohazard,” launched in 1996, created a survival horror setting for the players.

In a country town in the United States, a series of bizarre murders occurred, prompting a protagonist and other special troop members to be dispatched to the site.

There, they encounter zombies who attack humans. Later in the game, the mastermind who created the zombies is revealed.

Game players must slay zombies while they seek to solve the mystery of the story amid a horror setting. The game became a pioneer of the genre of “horror action."

The game continues to attract massive attention both in Japan and abroad. The latest series, “Biohazard Village,” released in May, sold 4.5 million units in about two months' time.

Initially, the game was made for Sony Corp.’s PlayStation game console. But if versions produced for other company's game consoles and remakes of past works are included, the total number of titles in the game series has reached nearly 150.

The genesis for such a popular franchise was an experimental release when Capcom decided to make the first 3-D computer graphic game themed on zombies.

Today, Takeuchi, 50, now a managing director at Capcom, is supervising the development of the series. He was in his fourth year at the company when he was pulled off the "Street Fighter" team to start on a zombie-based game.

At the time, developers in the "Biohazard" team started to study how zombies move and how they are created to increase the horror of the game.

To look for hints, the team members rented zombie films every day and studied them intensely as they had dinner in a meeting room.

Players can feel exhilaration when they kill zombies with simple operations while being more frightened by the difficult fighting operations intentionally programmed by the developers.

The team members were discussing how both things should be balanced.

Then, they completed the first “Biohazard.” In the game setting, zombies attack players one after another inside an eerie Western-style mansion.

In the first year of the sales launch, 1 million units of the game were sold.

“Biohazard 2” and “Biohazard 3” also enjoyed high popularity. But the development team felt that the game was in danger of repeating the same patterns and characters.

“We could not come up with an idea to make the zombies scarier,” Takeuchi said. “We reached our limitations.”

The developer team then focused on the actions of players shooting zombies rather than facing horror scenarios in “Biohazard 4,” launched in 2005.

In the first three works, the game screens often featured the view of looking down on the characters from above. In the fourth work, the game screens were fixed looking over the shoulder of the main character, which heightened the realism of the game.

Such a new style was welcomed by players and continued until “Biohazard 6” in 2012.

RETURN TO THE ORIGINAL

The developer team faced another obstacle.

As new game versions were added, more fans became emotionally involved with the stories and characters.

This emotional attachment came as social networking sites were gaining in popularity. Some fans complained that the game content was different than what they had hoped for.

The game developers felt that responding to such fans’ criticisms might have limited their creativity.

Their sense of crisis made them develop a totally new story and characters for “Biohazard 7.”

Like its original work, the new version returned to the initial style of the main character searching around in a dark abandoned house or old mansion.

“I never expected that this game would become such a long-running series,” Takeuchi said. “I have always tried to avoid the same characteristics."

The popularity of “Biohazard” extended beyond the boundary of the gaming world.

After it was adapted to a movie in Hollywood in 2002, the film series continued with five successive releases and another planned to be released soon in Japan.

According to Takeshi Okamoto, an associate professor of tourism at Kindai University, the history of zombie movies started in the United States in the 1930s.

In the 1960s or later, the current image of the dead transforming into zombies and attacking humans became popular with the public.

But in the 1990s, the figure dropped to 77. Okamoto said that psychological thrillers depicting the dark and disturbing nature of the human characters became more popular than any other horror movie.

Then, the “Biohazard” video game hit the market and zombies' popularity was reborn. In the 2000s, the number of screenings of zombie movies jumped to 318.

The “Biohazard” world was also adapted to CG animations and theme park attractions.

“The zombie genre could have ended in the 1990s,” Okamoto said. “The game might have become one of the triggers to revive such content.”