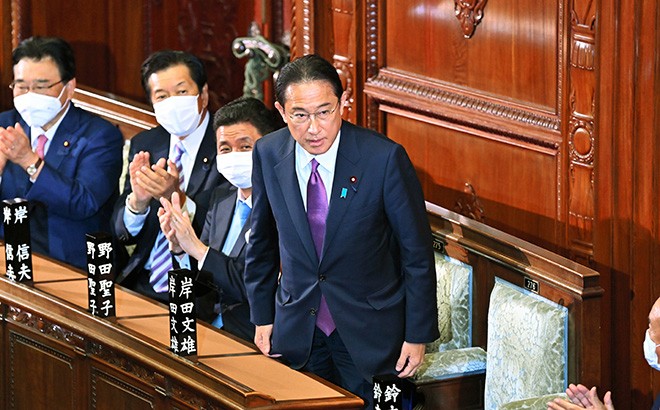 Prime Minister Fumio Kishida acknowledges the applause at the Lower House plenary session on Nov. 10 after he was re-elected to his post. (Takuya Isayama)

With his ruling Liberal Democratic Party having won an absolute stable majority in the recent Lower House election, Prime Minister Fumio Kishida was easily re-elected in the special Diet session that convened Nov. 10.

Kishida made only one change to his Cabinet first formed on Oct. 4. Yoshimasa Hayashi was named foreign minister because his predecessor, Toshimitsu Motegi, was appointed to the powerful LDP secretary-general post.

Other changes were made at the Lower House plenary session on Nov. 10.

Hiroyuki Hosoda of the LDP was selected as speaker while Banri Kaieda of the opposition Constitutional Democratic Party of Japan was named vice speaker.

New leadership was needed in the Lower House because the previous speaker and vice speaker retired instead of seeking re-election in the Oct. 31 Lower House election.

Kishida was expected to hold a news conference in the evening to explain the course his Cabinet would take, including in creating a “new capitalism.”

On Nov. 12, his administration plans to announce its overall strategy for dealing with the novel coronavirus pandemic.

A comprehensive package of economic measures will be compiled on Nov. 19 and Kishida will seek to pass a supplementary budget to implement those measures before year-end.

At his Nov. 10 morning news conference, Chief Cabinet Secretary Hirokazu Matsuno said, “The fundamental stance of the Kishida Cabinet is to push forward policy with a sense of speed to respond to the public’s concerns about the novel coronavirus pandemic, their expectations for rebuilding the economy and their sense of crisis over the increasingly serious international situation.”