Agency to phase out health care aid for evacuees in Fukushima 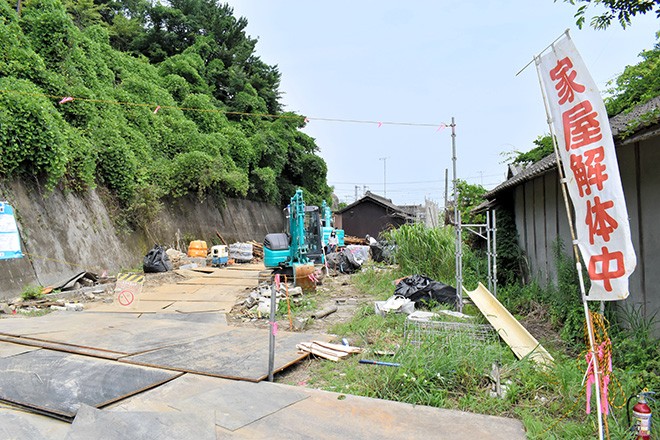 A house is torn down after it was left vacant by its occupants in Futaba, a town co-hosting the Fukushima No. 1 nuclear plant, in July 2021. (Shinichi Sekine)

The agency spearheading rebuilding efforts stemming from the Fukushima nuclear disaster is now in talks with local authorities about phasing out assistance programs to help evacuees meet their medical and nursing care costs.

Kosaburo Nishime, the minister in charge of rebuilding, acknowledged Nov. 9 that the Reconstruction Agency is engaged in discussions to assess what local governments want in the planned overhaul of the program.

Under the current program, residents of 13 municipalities in Fukushima Prefecture who were ordered or advised to evacuate in the aftermath of the triple meltdown at the Fukushima No. 1 nuclear plant in 2011 have had full or partial reductions of their health or nursing care costs. The number of evacuees from those municipalities totaled 150,000 as of August 2011.

The agency plans to begin scaling back the size of the aid as early as in fiscal 2023, according to a senior agency official.

The target that will come under the review concerns residents of 11 municipalities where the evacuation orders had been lifted by April 2017.

The agency plans to phase out the assistance over several years after notifying the appropriate authorities a year in advance of the end of the aid program.

But about 22,000 evacuees, including those from Okuma and Futaba, the towns co-hosting the crippled nuclear plant, as well as those who are not allowed to return due to continuing high levels of radiation, will not come under the planned review, according to agency officials.

The agency will consider that situation at a later date.

The move toward a full-scale review was prompted by concerns raised within the agency about the fairness of extending the assistance program when many residents in the same municipality had no access to such benefits.

For instance, Tamura and Minami-Soma have two types of evacuees, depending on where affected communities are located in their cities: residents ordered to evacuate and those who evacuated voluntarily. The latter are not eligible to receive any reduction in their health and nursing care costs.

This has given rise to a growing sense of resentment among those without access to the assistance in light of the fact the aid program has now been in place for many years.

On the other hand, plans to review the program have already met with fierce opposition from local officials.

“It is totally unacceptable,” said Ikuo Yamamoto, the mayor of Tomioka.

Evacuation orders were lifted in April 2017 for most parts of the town. But some areas are still off-limits.

“We are still in the middle of rebuilding,” Yamamoto complained. “I strongly request that the central government keeps the current program going as it is.”

Yuichi Harada, who is 72 years old and lives as an evacuee in Nihonmatsu after he fled Namie, both in the prefecture, said a blanket review of the program was the wrong approach.

“Some evacuees have to pay a lot more in medical fees than before as their health started to deteriorate” due to the evacuation, he said. “The government should fine-tune the program to reach out to people who badly need assistance.”

The central government sets aside about 25 billion yen ($221 million) annually for health and nursing care assistance to evacuees.

(This article was written by Shinichi Sekine and Senior Staff Writer Noriyoshi Ohtsuki.)