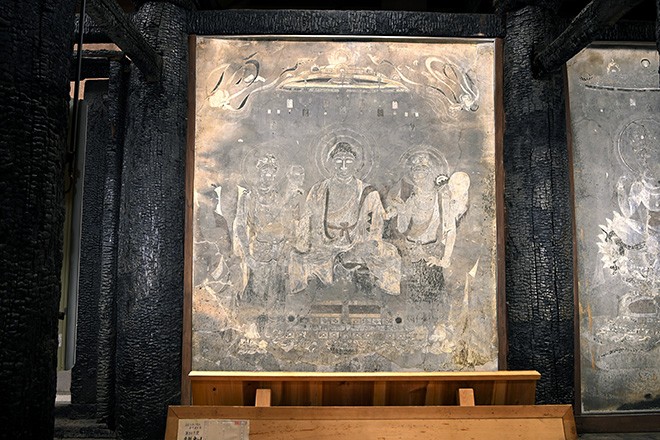 Mural No. 1 “The Pure Land of Shaka” at Horyuji temple in Ikaruga, Nara Prefecture, on Nov. 9 (Satoru Ogawa)

The first large-scale exhibition of the 12 mural screens in 27 years runs through Nov. 21.

The state-designated important cultural properties are believed to have been created from the latter half of the seventh century to the first half of the eighth century.

The paintings, renowned as ancient treasures of Buddhist art, were scorched and damaged by a fire inside Kondo in 1949.

Five hundred people who gave to the crowdfunding campaign will be permitted to see the murals at the temple. The funds raised are to be used for studies and research to enable future viewing of the murals by the general public.

Hiroki Nishi, 61, came from Amami-Oshima island in Kagoshima Prefecture to see them.

“I thought the murals were scorched and had been (mostly) destroyed, but I'm glad that they were restored and protected,” Nishi said. “I'd like to see them again, and I hope that lots of people can see them, too.”

Groups of five are allowed to view the murals at a time for 30 minutes. Visitor numbers were limited to prevent deterioration of the murals.

Inside a reinforced concrete storehouse, four large mural screens that reproduce the Buddhist Pure Lands for Buddha, Amitabha, Maitreya and Bhaisajyaguru and eight small mural screens describing Bodhisattva have been preserved along with pillars burnt black.

The storehouse is located east of Kondo and the Five-Storied Pagoda, known as the world’s oldest wooden structure.

The murals, which have changed color, with damaged areas clearly visible, are set in the same way as their original locations within Kondo.

“We would like to prepare fully to allow many people to see the murals and hope that they will understand the importance of cultural properties,” said Horyuji's chief priest, Shokaku Furuya.