Hibakusha saved by Swiss doctor says thank you to his organization 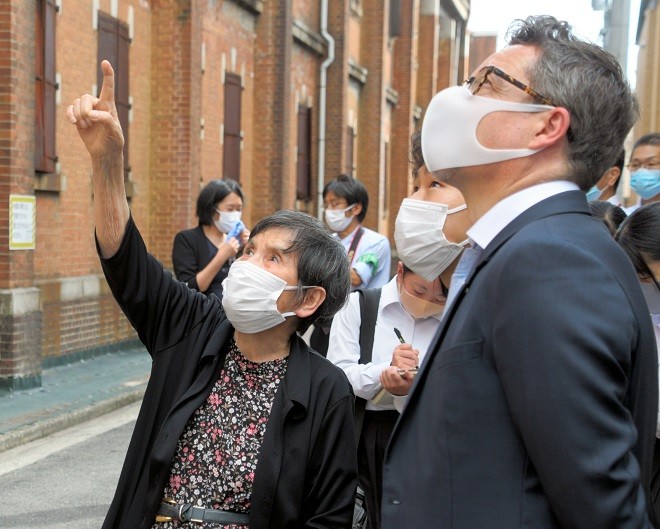 Regis Savioz, right, head of the Delegation in Japan of the International Committee of the Red Cross, listens to an explanation offered by Chieko Kiriake about what happened at the Imperial Japanese Army’s clothing depot in Hiroshima. (Tabito Fukutomi)

“Many people fled to this building,” Kiriake, 91, said on a visit in September, staring at the brick wall left as it had been. “There was moaning and the stench of corpses. This place was like a living hell.”

Kiriake was accompanied by Regis Savioz, 54, head of the Delegation in Japan of the International Committee of the Red Cross (ICRC).

In the aftermath of the atomic bombing of this western city, Kiriake, then 15, fell severely ill and was preparing herself for death.

But then she heard about a Swiss doctor who arrived in Hiroshima one month following the nuclear attack with a large amount of medicine to save hibakusha victims’ lives.

Kiriake continued taking the drugs believed to be from the doctor and regained her health.

According to the ICRC’s records, those life-saving drugs were likely offered by Dr. Marcel Junod (1904-1961), the then chief delegate of the ICRC’s Japanese mission.

Kiriake, who lives in Asa-Minami Ward here, met recently with the chief of the organization to which the physician belonged, to convey her gratitude 76 years after the catastrophe.

The ICRC provides relief in conflict areas under the slogan of the “neutral” and “humanitarian” action, and has helped many war victims in Afghanistan, Syria and other regions.

On Aug. 6, 1945, Kiriake saw an atomic bomb detonate overhead when heading for hospital to have her injury treated.

Although she barely survived the blast as she was within 2 kilometers from ground zero, Kiriake found her hair suddenly falling off in a bundle and her gums bleeding on a mid-September morning. With pale blotches appearing on her skin throughout her body, she felt terribly nauseous.

Her physical condition was so severe that Kiriake lost her will to live and “wanted to die so as to feel better.” She spent a succession of days while lying on her bed.

It was then that her mother told the bedridden Kiriake that “a foreigner is bringing in valuable medicine.” Her parent went to an aid station nearby to pick up a medical agent, and Kiriake tried it.

Whereas Kiriake said she does not remember what kind of medicine she took, she recalled that “using the drug for more than a month in the morning and evening allowed me to regain my strength.”

Junod arrived in Tokyo on Aug. 9, 1945, the very day an atomic bomb was dropped on Nagasaki.

The initial purpose of his visit was surveying the circumstances of Allied prisoners of war, but Junod heard about the devastation in Hiroshima and procured relief goods from the General Headquarters of the Allied Powers via negotiations.

He reached Hiroshima on Sept. 8 with penicillin, dried plasma and other agents that had never previously been used in Japan. He traveled through all the aid stations in the city for treatment in four days.

An ICRC representative said 15 tons of medical and pharmaceutical products Junod delivered helped as many as tens of thousands of hibakusha.

Following his death, a monument was erected at the Hiroshima Peace Memorial Park, and a service is since held to commemorate the “benefactor for Hiroshima.”

GRATITUDE FOR THE LIFE GIVEN HER

Kiriake, who currently speaks of her story as a hibakusha at schools, community halls and elsewhere, received an earnest request from Savioz to see him in order to offer her account.

It was the first time for the ICRC to interview a victim saved by Junod’s medicine.

Kiriake and Savioz toured the clothes depot and then talked at a cafe near the memorial park.

“A small boy was burnt to ashes and buried in the soil, and a girl clung to me, asking me to help her ‘find my mom,’ ” said Kiriake. “The experience of incinerating a classmate’s body left me with a mental scar that still haunts me.”

As Kiriake continued speaking for three hours while showing photos of her family and friends taken before the attack, Savioz carefully listened to her and caught a Shinkansen to return to Tokyo one and a half hours later than initially scheduled.

As her “final words,” Kiriake expressed her appreciation.

“I have been able to live for more than 90 years thanks to you,” said Kiriake, looking at Savioz. “I feel gratitude. It is, though, really pitiful that many people are struggling in warfare all over the world even these days.”

Savioz nodded and told her in a clear voice that his colleagues are now recovering corpses in Afghanistan like in Hiroshima 76 years ago, and that their meeting made him realize the world has learned nothing from history.

He promised to hand down the wishes of Kiriake, who does not desire revenge but settlement.