‘Etiquette’ for escalators poses danger for those with disabilities 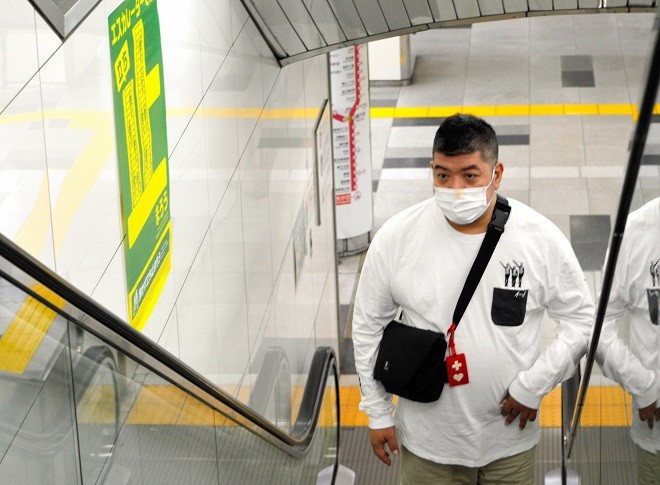 Masahiro Kawase remains on the left side of an ascending escalator in Tokyo’s Nerima Ward. He steps on the moving staircase from the right due to the paralyzed left half of his body but moves to the left to allow those in a hurry to pass on the right side. (Kenjiro Takahashi)

After he suffered a cerebral stroke in his early 40s, company employee Masahiro Kawase realized how difficult it is to adhere to "escalator etiquette" in Tokyo.

Kawase, 49, a company employee in Wako, Saitama Prefecture, close to the capital, underwent rehabilitation so he can wander about without a walking stick.

However, Kawase is unable to move his left arm and leg smoothly so he is forced to get on escalators from the right.

The problem is that people are supposed to stand on the left side on escalators in the capital and leave the right side open for people to pass.

“I do not have the courage to stay on the right,” said Kawase, referring to the established practice involving moving staircases.

The "keep-the-way-open" rule is common in urban regions across Japan to allow those in a hurry to walk through one side unhindered. However, the etiquette varies depending on the region.

People in Tokyo and Osaka keep the right and left sides available, respectively, for such individuals on escalators.

The etiquette is, however, difficult for those suffering from disabilities to follow.

For that reason, Saitama Prefecture has introduced an ordinance to obligate citizens to stand still on escalators, and railway operators are calling for proper use of those kind of steps.

Despite all that, little has changed about escalator etiquette.

On a weekday in October, Kawase demonstrated how he uses escalators while commuting to his office.

Kawase caught a train at around 7:20 a.m. at Wakoshi Station near his home along the Tokyo Metro Yurakucho Line. Arriving in Nagatacho Station, he changes trains to travel on the Hanzomon Line to reach his workplace in central Tokyo.

Though he usually works at home amid the novel coronavirus pandemic, Kawase needs to go to the office once or twice a month.

At 8 a.m. or so that day, Kawase showed up at Nagatacho Station.

He joined a line of people waiting on the left to ride an escalator. When his turn came, Kawase grabbed the right handrail while watching his feet, put his right leg on a step and then slid his paralyzed left foot onto the moving staircase.

Carried by the escalator, Kawase released the right handrail and started transferring his body to the left side with his movable right leg. He gradually shifted his position from right to left.

“This method cannot be recommended for other people,” Kawase said with a bitter smile.

There were no stairs available beside the escalator.

While posters saying, “Do not walk, stand still” and “Escalator use reform,” were pasted on walls nearby, a total of 21 men and women were seen passing by Kawase without heeding the warnings.

Many individuals walking on the right side of the escalator were absorbed in looking at their smartphones.

Kawase said his life was once put in danger because of escalator etiquette. When he was moving to the left on another descending escalator some six months ago, Kawase was struck by the bag carried by a man who was passing him.

He stumbled but managed to regain his footing after losing his footing. Kawase said the possibility of “an accidental fall” came to mind.

Kawase said safety cannot be ensured unless the escalator etiquette rule is reviewed and changed.

“As long as the social custom of leaving one side open remains, I believe it would be better for me to continue stepping on escalators in my current fashion although the method entails some risk,” said Kawase.

The tradition of leaving one side available for walkers on moving staircases started in the latter half of the 1960s in Japan, as the habits in London and elsewhere outside the nation were gradually accepted as etiquette.

The rule is problematic since escalators are not designed in a way that users should walk on the moving staircases.

According to the Japan Elevator Association, escalator steps are narrower and higher than those on standard elementary school stairs. The organization thus calls on people not to walk on escalators on its website.

Data from the association show 1,550 cases were reported nationwide from 2018 through 2019 where people stumbled or were caught between steps. Many of these, or 734, involved escalators at public transportation systems, followed by 353 at malls.

Efforts are being made to bring an end to the tradition.

The licensed physical therapists’ association in Tokyo set up an escalator usage improvement committee to urge people to stand still on moving stairways five or so years ago.

Working with rail companies and local governments, the association is staging public awareness campaigns as well.

Saitama Prefecture in October enacted an ordinance to make it mandatory for citizens to “stop walking on escalators,” although offenders face no penalties. Operators of escalator-outfitted facilities are alike obliged to make visitors understand they should stand still on moving staircases.

Chizuko Miyata, 65, a homemaker in the capital’s Ota Ward, is likewise taking action as an individual to improve the situation, however little it may be.

Her endeavor began a year earlier. When Miyata injured her right leg and stood at the right on an escalator with a walking stick in her left hand at a station in Tokyo, a man clucked and passed by her.

Though Miyata left a step in front of her open so as not to block the escalator, the male user cursed her, saying, “Stay out of my way, old bag.”

Miyata said this experience brought feelings of fright and anger to her at the same time.

After Miyata's leg fully recovered and she became able to move around without a walking stick, she continued staying on the right when fewer individuals are on escalators to increase public awareness.

“I feel a sense of fear (while keeping to the right),” she said. “But I am taking that action so that it will be taken for granted to stop on escalators and accidents can someday be reduced.”

Jun Ishikawa, a professor of disability studies at the University of Shizuoka, who serves as chair of the Cabinet Office’s panel on policies for disabled individuals and is visually impaired, noted that escalator etiquette poses a problem from the perspective of efficiency and security.

“Keeping one side unoccupied will result in reducing the total number of people who can be carried by escalators in one go,” said Ishikawa.

He continued: “The practice of leaving one side open may be convenient for people with healthy legs, but that often causes trouble for those with disabilities and those with small children. As escalators are part of public places, the focus should be put on lessening users’ risk.”