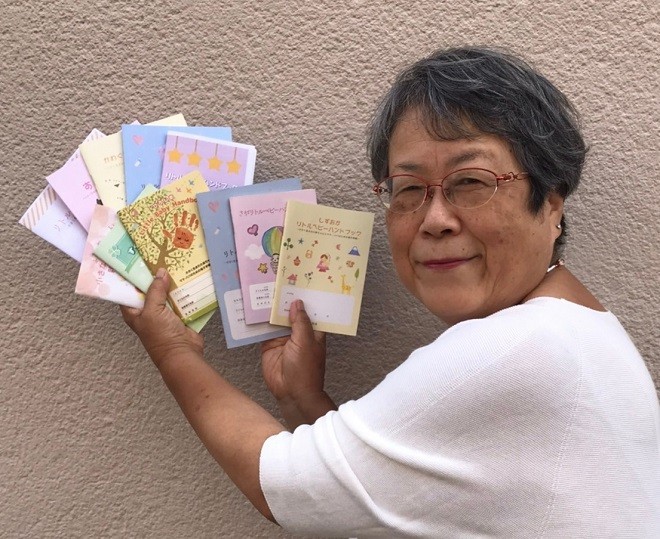 Akemi Bando works to boost use of a handbook for underweight babies, a supplement to a maternal and children's health leaflet. (Provided by Akemi Bando)

A Japanese teacher of students with disabilities was shocked to find on a visit to Vietnam that children there were suffering from aftereffects of polio, measles and other disorders easily prevented in Japan.

Now retired, Akemi Bando, 70, is going all out to spread the benefits of a maternal and child-health (MCH) handbook that is distributed to mothers in Japan to other countries.

Working with the Japan International Cooperation Agency (JICA), Bando translated the material and reviewed its content in Vietnam and Nigeria, taking into account the local cultures and lifestyles.

Thanks to her endeavors, the handbook is currently used to record the health details of mothers and children from pregnancy through babyhood in more than 50 countries and regions.

Seeing young Vietnamese children suffering from blindness and unable to walk for reasons that “could have been eliminated through inoculations,” Bando felt her heart ache.

On her return to Japan, she founded a nongovernmental organization to support Vietnamese children, and was appointed as secretary-general of the international committee on the MCH handbook for her contribution via the NGO.

She says her motivation for assembling the handbook was that, “Receiving inoculations and diagnoses regularly based on MCH handbooks may offer a means for people to prevent disorders and identify problems in the early stages.”

After retiring as a teacher at age 51, Bando entered graduate school, where she studied international cooperation.

“Education and international cooperation are the same in essence,” she says. “What's important is to think of people first without comparing them with others."

Bando is currently promoting a supplementary handbook to the MCH leaflet that targets parents with underweight children.

She says what drives her to travel across the globe spreading the word about ways to protect children's health is her strong desire to “live in connection with others.”

Perhaps that desire for connection stems from her experience of losing her parent and brother at a young age.

After her father and elder brother died in succession from disease when she was 14, Bando, haunted by the thought that their feeble mother also would die soon, hugged her older sister every night as they cried in grief.

Bando now lives separately from her three grown children, but she still keeps two cats and 21 killifish with her husband at their home in Kyoto. Bando says that is because she loves “nurturing someone” from her heart.