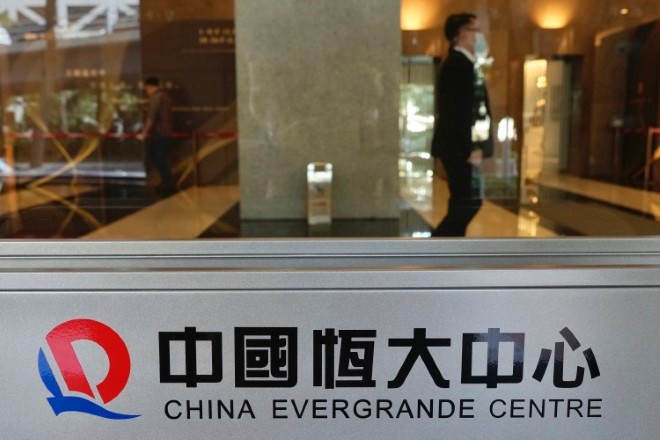 In this Oct. 4 file photo, a security guard stands at the headquarters of China Evergrande Group in Hong Kong. (AP photo)

HONG KONG--everal bondholders of China Evergrande Group have received coupon payments from the indebted property developer, a source with knowledge of the matter said on Thursday, easing concerns about a potentially destabilising default.

Chinese media outlet Cailianshe earlier reported several bondholders have received interest payments of the three bond tranches that had a total of more than $148 million in interest payments due last month but which had a grace period that ended Wednesday.

The source declined to be named because they were not authorised to speak to media. Evergrande did not respond to request for comment.

Evergrande, the world's most indebted developer, has been stumbling from deadline to deadline in recent weeks as it grapples with more than $300 billion in liabilities, $19 billion of which are international market bonds.

A failure to pay would have resulted in a formal default by the company and trigger cross-default provisions for other Evergrande dollar bonds, exacerbating a debt crisis looming over the world's second-largest economy.

Shares of Evergrande listed in Hong Kong jumped over 9% by mid-morning on relief the latest deadline was met.

The company, which also has coupon payments totalling more than $255 million due on Dec. 28, has come under pressure from a liquidity crisis that has weighed on the sector and threatens hundreds of projects.

The market is also watching rival Kaisa Group, which has coupon payments totalling over $59 million due on Thursday and Friday. Kaisa has the most offshore debt of any Chinese developer after Evergrande.

Kaisa, which has missed a payment on a wealth management product, was downgraded by S&P to "CCC-" from "CCC+" with a negative outlook on Thursday, following a similar action by Moody's.

The rating agency said Kaisa's liquidity appears to be depleted, and it expects a default scenario is inevitable within the next six months.

China's property woes have rattled global markets since September despite Beijing's efforts to reassure markets the crisis would not be allowed to spiral out of control.

Regulators and government think tanks have held meetings with developers in the past few weeks, and the market is expecting some easing in credit and housing policies to prevent a hard landing of the sector.